British Queen hands over the reigns to Prince Charles 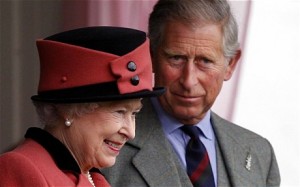 It is being dubbed the “gentle succession” – as the Queen gradually begins to relinquish some of her traditional duties as monarch.

As she approaches her 88th birthday in April after almost 62 years on the throne, she has agreed to hand over part of her workload in a historic “job-share” arrangement with Prince Charles.

In a royal first, he will be taking on more head of state-style responsibilities as
the Palace starts to make tentative plans for his eventual succession.

The first sign of the partial power transfer will be the merging this week of the Queen and Charles’s press offices.

In future any announcements concerning the monarch and her 65-year-old
eldest son will now come from the same source. Palace sources insist the switch will be entirely seamless.

Princes William and Harry will also play their part in the new set-up, with both assuming far more responsibility since they relinquished their military roles.

One aide said: “This is about passing the baton to the next generation.

“The Prince of Wales’s diary is chock-full. Even he realises with the best will in the world he can’t go on like that.

“This is not going to be a sudden shift. It is a gradual process which will be borne out over the next few years.

“It’s important to note that the Queen is still working very hard. Every day you see her with the red box of Government papers and giving audiences.

“Charles will be doing less of his campaigning and the things he likes to do and more of the head of state role.

“While the Queen is still in excellent health, she is inevitably becoming a little more frail because of her age. Charles and Camilla will be doing much more of the public work on her behalf.”

Her Majesty is already the oldest ever British monarch and will soon overtake Queen Victoria’s longest-serving record of 63 years.

But it was stressed yesterday that the changes do not mean she is planning to take a back seat.

The Mirror can exclusively reveal she and Prince Philip will go to Rome later this
year for a visit that was postponed in 2013.

They will also visit Normandy, along with Charles, this summer to commemorate the
70th anniversary of the D-Day landings.

The merger of Palace press offices is likely to see Charles’s new spin doctor, the
highly respected former tabloid reporter and BBC Head of Communications Sally Osman at the helm of the new operation

A senior insider said: “It is expected that she will be Press Secretary for both main players – The Queen and the Prince of Wales.”

The fact that the Queen’s age is being widely discussed in senior circles was made clear in an award made in the New Year’s Honours List.

There was a second knighthood for her private secretary, Sir Christopher Geidt – for “a new approach to constitutional matters… [and] the preparation for the transition to a change of reign”.

Charles, who swore to be his mother’s “liege man in life and limb” just like his dad Prince Philip, is being her back-up should she need him.

But there is one area where the prince will not be joining in – her weekly
briefings with the Prime Minister.

One former member of the Royal Household believes this would be a step to far. He said: “Those meetings have to be strictly private. A change for the PM to unburden himself without fear of favour. No notes are taken, there are no minutes. It is strictly off limits.”

The source added: “The problem for Charles is, unlike with the Queen, some ministers could see fit to leak the contents of these meetings and suggest that the prince is becoming ‘too political’.

“However that is not the case, he is within constitutional rights. His role as heir to the throne is today purely formal – although he maintains the right ‘to be consulted, to encourage and to warn’ Her Majesty’s ministers via regular audiences with the PM and the ministers themselves.”

Another royal source said it was widely expected that the Queen would no longer be going on long-haul flights to distant lands on diplomatic missions.

But he said she would not be giving up on key royal engagements altogether – even if they did involve a fair bit of travelling.

The involvement of other royals in the revamped system is also being seen as an important factor.

In the modern media world they – the younger generation of William, Kate and Harry – naturally steal most of the headlines.

But it is no accident both William and Harry have quit their roles as helicopter pilots to focus more on their royal duties – although Harry has, of course maintained his position as a captain in the Household Cavalry.

The source said: “What you are seeing, albeit very subtly, is a monarchy in transition. The participation of all the players, particularly Charles and William, is crucial in making things work.”

He revealed: “There are a few noses out of joint – particularly the Queen’s other children, most of all Prince Andrew – who all think they have a part to play.

“But Charles has always believed that a slimmed-down, more cost-effective Royal Family is the best way forward for the 21st century and beyond.”