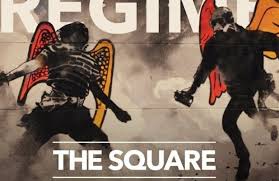 It’s been an unpredictable, but intensely rewarding year for Egyptian-American filmmaker Jehane Noujaim. This morning, “The Square,” her verite portrait of the ongoing Egyptian Revolution and several of its most passionate activists, was nominated for best documentary feature at the 2014 Oscars.

At this time last year, the documentary director was scrambling to finish “The Square” before its January premiere at the 2013 Sundance Film Festival. A year later, Noujaim is releasing a new version of the film which takes into account the forced military removal of the Muslim Brotherhood president Mohammed Morsi in the summer of 2013. The emotionally-gripping film has also won a slew of awards, including the Audience Award at both Sundance and the Toronto International Film Festival. Noujaim personally is up for a Director’s Guild of America Award.

This Friday, “The Square” will debut in several select cities — including San Francisco and Chicago. It will simultaneously start streaming on Netflix .

Noujaim and “The Square” producer Karim Amer recently spoke to Speakeasy about their whirlwind year.

Why did you decide to sign with Netflix to stream your film? Did you feel as if you’d ultimately get a larger viewing audience?

Karim Amer: Absolutely. Netflix, from a distribution perspective, understands the changing landscape of how people are consuming content. We’re excited about being their first official documentary – they really believe in the film and are standing up to support it.

Jehane Noujaim: We wanted to choose a place that we knew would reach the widest and most diverse audience, and because of the relatively low cost of Netflix, we felt this was the place where the film would be viewed most widely.

Amer: It’s interesting, because a few years ago, if you even brought up streaming rights with filmmakers, they wouldn’t even care.

Noujaim: I don’t even know who has the streaming rights for “Startup.com” [her 2001 documentary about the dot-com boom and bust], I have to figure that out. “Control Room” [her 2004 documentary on Al Jazeera] is up for free on youTube.

Is the film 100% done? Would you still want to make changes if there was another breakthrough or tragedy in the near future?

Noujaim: We won’t do another version. I think it’s about having the final story and then doing updates from there. In verite film, you never really have a narrative structure. With most films I’ve made, I’ve had a projected ending in my head. With this film, none of us had been through a revolution before, so everyone was living day to day. There was not much planning for the future.

Amer: It’s anticlimactic in a way, because when a film starts with the downfall of a president [like Hosni Mubarak], it’s hard to match up to that.

How did the use of social media change as the revolution progressed?

Amer: For Egypt, a country that doesn’t have a real history of civil liberties and democratic rights, there’s now this feeling that if people witness an act of injustice, they can capture it with a camera and upload it and it can get tweeted out and spark conversation and people coming out to the streets. That’s a very powerful shift in consciousness. At the same time, we now also have government officials who are using Twitter as their official channels because they didn’t trust what the media is saying. Egypt is at the epicenter for how democratic values are going to look like in the 21st century.

You’ve been screening this film all around the world. Where has it evoked the most passionate response?
Amer: We’ve had Mormon churches leader watch the film in Utah and they love Magdy, the Muslim Brotherhood character. Another friend of ours, who’s part of the Evangelical Church in Alabama, said he connected with the film because he was someone who had struggled with religion and politics his entire life. It’s good to see people with different backgrounds connecting with characters in the film.

Noujaim: The most exciting screening for me has been when we screened at a high school and a couple of young women, 16 or 17, came to me afterwards and told me they’d never really followed Egyptian or Middle Eastern politics, but they didn’t see the film as just about Egypt. They saw it as being about change and how change happens, and they felt alive watching the film because the characters felt alive and so connected to the change they wanted to see in their world. They were fighting for something bigger than themselves.

This film is called “The Square” because there are squares all around the world. People are using this idea of taking over a space and demanding change; it’s the zeitgeist of the time and young people have really connected with that.