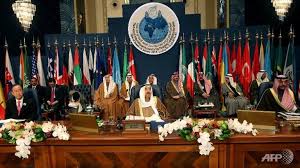 Donors meeting in Kuwait Wednesday pledged more than $2.4 billion in humanitarian aid for victims of the Syrian war, which the UN chief said had left half the population in need of urgent help.

The meeting comes just a week before the so-called ‘Geneva II’ peace meeting aimed at finding a political solution to the 34-month conflict that has claimed 130,000 lives.

The meeting had gathered some $1.3 billion by midday as the UN sought to raise an unprecedented $6.5 billion.

“I am especially concerned about reports of starvation,” in Syria, he said.

The host country led the donations with a pledge for $500 million announced by the emir of Kuwait, Sheikh Sabah al-Ahmed al-Sabah at the opening of the conference.

US State Secretary John Kerry announced a supplementary aid package of $380 million, bringing the total US humanitarian aid to Syria to $1.7 billion.

“I am proud that the United States is the leading donor of humanitarian aid,” Kerry told the conference, pointing out that “Syria’s civil war is not simply Syria’s problems.”

Oil-rich Saudi Arabia said it will give $60 million in supplementary aid, so did neighbouring energy-rich Qatar, both of which are strong backers of the rebellion against the regime of President Bashar al-Assad.

“We see the humanitarian situation going from bad to worse, we have seen no improvement,” Georgieva said of the conflict, which is thought to have killed more than 130,000 people.

With fighting on the ground as intense as ever and the prospects of a negotiated solution still dim, rights and aid groups said urgent funds were needed.

“The continuing violence in Syria has sparked one of the biggest humanitarian crises in recent history,” Amnesty International said in a statement Tuesday.

“The world’s response to the Syria crisis so far has been woefully inadequate,” Amnesty said, ahead of the Second International Humanitarian Pledging Conference for Syria.

The UN is looking for $2.3 billion to support 9.3 million people inside Syria and $4.2 billion for Syrian refugees, expected to nearly double to 4.1 million by year’s end.

The UN has described the $6.5 billion Syria appeal as the largest ever in its history for a single humanitarian emergency.

At the first donors’ conference in Kuwait last January, participating nations pledge $1.5 billion, 75 percent of which was delivered, according to a Kuwaiti official.

In a research released Wednesday, Aid group Oxfam said Russia, Japan and South Korea contributed much less than their fair share to the Syrian crisis.

According to aid agencies, 10.5 million Syrians are food insecure, more than a million children under five suffer from acute or severe malnutrition, about half the population has no access to adequate water sources or sanitation and 8.6 million have insufficient access to healthcare.