Israel DM apologizes to Kerry over remarks that outraged US 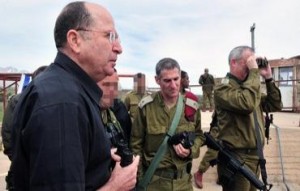 Israel’s hawkish defense minister apologized to U.S. Secretary of State John Kerry on Tuesday after a newspaper quoted him scorning the diplomat’s quest for Israeli-Palestinian peace as messianic and obsessive.

Moshe Yaalon did not deny making the closed-door remarks published on the front page of the best-selling Yedioth Ahronoth newspaper, which drew rare condemnation from Washington and added to acrimony over Jewish settlement of occupied West Bank land where the Palestinians seek statehood.

Yaalon was initially silent about the report but he moved to calm the furor after Israeli Prime Minister Benjamin Netanyahu implicitly rebuked him in a speech. He issued a statement of guarded appreciation for the United States and followed it hours later with another explicitly praising Kerry.

“Israel and the United States share a common goal to advance the peace talks between Israel and the Palestinians led by Secretary Kerry,” it said, in Hebrew and English.

“The defense minister had no intention to cause any offence to the secretary, and he apologizes if the secretary was offended by the remarks attributed to the minister.”

Kerry has been on a diplomatic blitz in recent weeks to persuade Israel and the Palestinians, who resumed statehood talks in July after a three-year deadlock, to agree on an outline proposal addressing the core issues of their conflict.

Israel balks at removing settlements – viewed as illegal by most world powers – and has questioned the credibility of Palestinian President Mahmoud Abbas, whose authority has been limited to the West Bank since he lost control of Gaza in a 2007 civil war to Hamas Islamists, who spurn the Jewish state.

“Secretary of State John Kerry – who has come to us determined and is acting out of an incomprehensible obsession and a messianic feeling – cannot teach me a single thing about the conflict with the Palestinians,” Yedioth quoted Yaalon as saying, without specifying when or where he had spoken.

“The only thing that can save us is if Kerry wins the Nobel prize and leaves us alone.”

Censuring Yaalon, State Department spokeswoman Jen Psaki said earlier on Tuesday that, if accurate, his remarks were “offensive and inappropriate, especially given all that the United States is doing to support Israel’s security needs”.

Kerry, who made his 10th visit to Jerusalem last week in less than a year, has been pushing both sides to agree to at least a preliminary deal. Israeli misgivings at the Palestine talks compound anger within the Netanyahu government at an interim deal that the United States – represented by Kerry – and five other world powers reached with Iran in November to rein in its nuclear program in return for sanctions relief.

Netanyahu spoke by phone to a senior U.S. official in a bid to smooth over the controversy over the Yaalon report, an Israeli official said on condition of anonymity. He said Yaalon also discussed the matter with U.S. Ambassador Dan Shapiro.

Addressing parliament, Netanyahu appeared to take Yaalon, a member of his right-wing Likud party, to task, extolling Israel’s shared interests with “our great ally” in Washington.

“Even when we have disagreements with the United States, they always pertain to the matter at hand, and are not personal,” Netanyahu said in his speech.

Yaalon has been a strong supporter of settlement building. As Israel’s military chief, he was replaced in that post before its 2005 Gaza pullout, a move he opposed.

One of the sticking points in peacemaking has been Israel’s demand to keep a military presence under any future peace deal in the Jordan Valley, between Jordan and the West Bank.

Kerry has presented the sides with ideas for security arrangements in the Jordan Valley. Neither has publicly endorsed them. According to Yedioth, Yaalon said: “The American security plan is not worth the paper it is written on.”

The State Department challenged Yaalon on the issue.

“Secretary Kerry and his team … have been working day and night to try to promote a secure peace for Israel because of the secretary’s deep concern for Israel’s future,” Psaki said.

“To question his motives and distort his proposals is not something we would expect from the defense minister of a close ally.”

The dispute erupted a day after U.S. media published excerpts from a memoir by former Defence Secretary Robert Gates in which he said he had tried to get Netanyahu barred from the White House, accusing him of being arrogant and ungrateful.