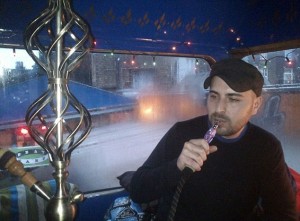 An Italian man allegedly cut open his Dublin landlord’s chest and tried to eat his heart following a fight over a chess match.

Saverio Bellante, 34, was charged Monday with murder. Police say he admitted his guilt after being arrested Sunday at the home he shared with Tom O’Gorman, a policy researcher for a conservative Catholic think tank in Ireland.

Pathologists said the 39-year-old victim suffered dozens of severe knife wounds to his head and chest, which had been cut fully open. Ireland’s senior pathologist determined that the heart remained, but a lung was missing.

Police offered no explanation for what happened to the lung. Evidence suggested that O’Gorman’s prone head and body also were bludgeoned with a dumbbell.

Bellante called police to report the killing. He claimed to officers that he had cut open O’Gorman’s chest and tried to eat his heart after a dispute over a move in a chess match the two had been playing.

He offered no plea at his arraignment Monday in a Dublin court. When Judge David McHugh asked him why he had no lawyers, Bellante said he wanted to represent himself and would decline state-funded legal aid.

A policeman, Det. Patrick Traynor, testified that, when charged with murder in police custody earlier Monday, Bellante replied: “I am guilty.”

McHugh ordered Bellante to be held without bail in Dublin’s Cloverhill Prison and to receive a psychiatric evaluation pending his next court appearance Friday.

Bellante, a native of Palermo on the Italian island of Sicily, had worked in Dublin for the past two years at a pharmaceutical company.

O’Gorman lived with his mother in the prosperous west Dublin suburb of Castleknock. After she died in 2012, he rented a room to Bellante, who had lived there only a few months.

O’Gorman wrote frequent papers and blog posts for the Iona Institute, which lobbies against same-sex marriage and abortion rights in Ireland, a predominantly Catholic nation.