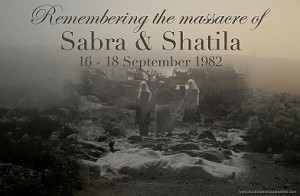 While Israeli politicians and their allies found something to praise for former prime minister Aaron Sharon who died Saturday in a hospital near Tel Aviv after eight years in coma, Palestinians, Lebanese and others were blunt in their criticism.

Some Lebanese remembered Sharon as the man who inflicted severe suffering, vengeance, or punishment to their country, saying he was responsible for the massacres in the Sabra and Shatilia refugee camps in Lebanon in 1982 when he was defense minister.

“Perhaps the souls of the martyrs from the Sabra and Shatila massacres can get a bit of comfort,” Lebanon’s social affairs minister, Wael Abu Faour, said Saturday in a statement . “There is now less evil in this world.” He said.

Adel Makki rushed into the street in Beirut’s Shatila Palestinian refugee camp Saturday to hand out sweets when he learned of the death of Ariel Sharon, the Israeli leader Palestinians blame for a massacre of hundreds there and in the nearby Sabra camp.

“I was relieved when I found out that Sharon was dead. I think the [eight] years he spent in a coma were punishment from God for the crimes he committed,” Makki, age 19, told AFP.

Israel invaded Lebanon on June 6, 1982 , but over over three days, beginning on September 16, 1982, hundreds of men, women and children were massacred in Sabra and Shatila on the southern outskirts of Beirut.

Some 500 more simply vanished without a trace, among them Makki’s uncle.

Many residents of Sabra and Shatila said Sharon should have been prosecuted, echoing the statements of many compatriots in the Palestinian territories and rights watchdogs.

According to the lebanese daily Al-Akhbar, Sharon will forever be remembered in Lebanon as the “Butcher of Beirut” .
Sharon, who was defense minister at the time, was forced to resign after an Israeli commission of inquiry found he had been “indirectly responsible” for the massacres.

Sharon denied any wrongdoing in the slaughter, claiming he was unaware that an extremist, sectarian Christian militia would harm residents of the camps. But evidence has mounted since the initial Israeli probe of the massacre, showing that Sharon had a plan to “cleanse” West Beirut, which encompasses the camps.
Hamas, the militant Islamic faction that leads the Gaza Strip, called the death “a sign of God’s punishment and a lesson to all tyrants.” Mustafa Barghouti, a moderate member of the Palestine Liberation Organization’s central council, told the BBC that Mr. Sharon had left “no good memories with Palestinians.”
“Unfortunately, he had a path of war and aggression and a great failure in making peace with the Palestinian people,” Mr. Barghouti said.

Sarah Leah Whitson, Middle East director at Human Rights Watch, called it a “shame that Sharon has gone to his grave without facing justice” for, among other things, his role in the Sabra and Shatila massacres. She called his death “another grim reminder that years of virtual impunity for rights abuses have done nothing to bring Israeli-Palestinian peace any closer.”