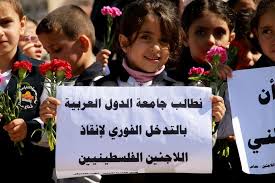 A Syrian monitoring group said Friday it has documented the deaths of 41 Palestinian refugees in besieged Yarmuk camp as a result of food and medical shortages, including women and children.

“Food and medical shortages have killed at least 41 people in the past three months in Yarmuk” in southern Damascus, which has been under suffocating army siege ever since rebel groups took control of it, said the Syrian Observatory for Human Rights.

Of the total, 24 have died as a result of malnutrition. The rest died either because of a lack of specialised treatment or because of a shortage of medicines, Observatory director Rami Abdel Rahman told AFP.

According to the Britain-based group, which relies on a network of activists and doctors across Syria for its reports, three of the fatalities were children and 13 of them women.

“Among them was a one-day-old child who could have survived had there been incubators,” said Abdel Rahman.

The UN agency for Palestinian refugees has frequently warned about the dire conditions in Yarmuk.

On Thursday, UNRWA spokesman Chris Gunness described “extreme human suffering” in the camp, saying food shortages continued and that the absence of medical care had led to women dying in child birth.

Yarmuk was once home to some 170,000 people but tens of thousands have fled fighting in the camp.

Syria is officially home to nearly 500,000 Palestinian refugees, around half of whom have been displaced by the conflict that broke out in March 2011, becoming refugees for a second time.

Syria´s army has imposed tight sieges on several rebel towns and neighbourhoods near Damascus and beyond.

Photo: Poster reads : We urge the Arab league to interfere and rescue the Palestinian Refugees