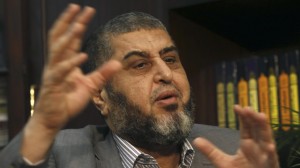 “Shater was planning to establish a national defense college and recruit 50 thousand youths, including 30 thousand from the Islamic movements, and 20 thousand from al-Qaeda through [al-Qaeda chief] Mohammad al-Zawahiri,” said Tawfic.

“This college would have fresh graduates every six months and become like the [Iranian] Revolutionary Guard, pledging full loyalty to the president,” he added.

Egypt’s Brotherhood came to power in 2011, ruling for just one year before former President Mohammad Mursi – who hailed from the Brotherhood – was ousted in July 2012 following mass protests against his rule.

Shortly after Mursi was toppled, Shater, along with most other senior Brotherhood figures were detained by the interim government’s security forces.

Al Arabiya
Photo: Presidential candidate from the Muslim Brotherhood and the Freedom and Justice Party (FJP), Khairat al-Shater gestures during an interview with Reuters at his office in Cairo April 8, 2012. He planned to establish a “Revolutionary Guard” modeled after Iran’s elite military unit, a former member of al-Qaeda told an Egyptian TV channel.