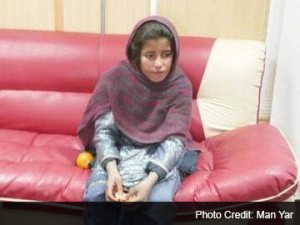 An Afghan girl believed to be about 10 years old was found wearing a bomb vest in Helmand province after her brother encouraged her to carry out a suicide attack, officials said on Monday.

The girl, named as Spogmai, had been persuaded to attack border police after male relatives accused her of having “illicit relations” with officers, according to reports.

She was strapped into a bomb harness by one of her elder brothers and sent across a river to her target, in southern Helmand. But she began crying with cold while crossing the river and her brother, a suspected Taliban commander called Zahir, fled, according to the Pahjwok news agency. Some reports said she was still wearing the vest when she handed herself in to the police; others said Zahir took it with him.

Taliban insurgents are regularly accused of using brainwashed young boys as suicide bombers in attacks on international or government targets, but the use of girls is much rarer.

Colonel Hamidullah Siddique said the attempted attack had happened in Khan Neshin district in the south of Helmand province, and Spogmai had turned herself in to police there. He said Zahir was yet to be arrested and Spogmai had asked them not to send her back home, fearing her family would subject her to atrocities. She told reporters her brother had been harassing her with the allegation she had “illicit relations” with police.

Police said Zahir was a Taliban commander who operated in Khan Neshin.

Afghan security officials say many young suicide bombers are ferried from madrassahs in Pakistan’s tribal regions. They are often prepared for their attacks by being given verses of the Koran, which their handlers tell them will carry protection from the blast.