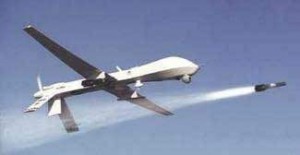 Hours after Secretary of State John F. Kerry vowed the U.S. will not send troops again to Iraq, the White House said the administration will send dozens of drones and missiles to aid the Baghdad government against al Qaeda terrorists.

“This is something for the Iraqis to take the lead on and handle themselves,” said White House press secretary Jay Carney. “But that doesn’t mean that we cannot assist them, and we have.”

“We’re working closely with the Iraqis to develop a holistic strategy to isolate the al Qaeda-affiliated groups,” Mr. Carney said. “Now, this situation remains fluid and it’s too early to tell or make conclusions about it, but we’re accelerating our Foreign Military Sales deliveries.”