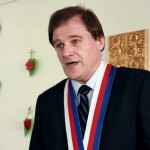 The Prague neighborhood where a safe exploded Wednesday, killing the Palestinian ambassador, is seeking to oust the new Palestinian embassy complex from its territory after Czech police found unspecified illegal weapons on site.

Ambassador Jamal al-Jamal, 56, died of massive injuries when an embassy safe that was recently relocated to the new Palestinian complex in Suchdol exploded . Palestinian Foreign Minister Riyad al-Malki told Al Jazeera there was no sign of foul play nor had Jamal been targeted in any way.

His death is being investigated as a case of negligence and possession of illegal armaments by diplomats in the new Palestinian complex, which includes the embassy and the ambassador’s residence.

Petr Hejl, the mayor of Suchdol, said he is sending a request Friday to the Czech Republic’s Ministry of Foreign Affairs following protests from local residents about security concerns. Hejl said residents felt “deceived” by Palestinian diplomats keeping unlicensed weapons in the embassy.

“We have lost trust in the diplomats,” he told the Prague Post Friday.

Hejl has previously commented that the new Palestinian embassy complex had not yet received final approval from the city for use, hinting at technical grounds for the embassy’s expulsion.

Johana Grohova, the Czech Foreign Ministry spokesperson, told Al Jazeera the ministry had not yet received the Suchdol neighborhood’s letter as of Friday afternoon but that the Ministry would be “communicating this matter with the local representatives.”

Grohova also said the Ministry has demanded an explanation from the Palestinians about the “unregistered weapons.”

“[The weapons] could be in breach of the Vienna Convention, and we will be demanding an explanation from the Palestinian side.”

Initial reports indicated that the ambassador had recently changed offices and may have been inspecting the relocated safe when it exploded. Some safes are fitted with mechanisms that destroy documents contained within if the lock is tampered with.

Malki told Al Jazeera that the safe had been inside the offices of the Palestinian Liberation Organization (PLO) since the 1980s and that it had not been touched in more than 20 years until it was relocated to the new embassy complex.

The PLO had offices in Prague in 1976 but it obtained diplomatic status in 1983 when it was officially recognized.

On Thursday, however, Palestinian Embassy spokesman Nabil El-Fahel contradicted Malki’s statement when he told Czech radio that the safe had been in constant use.

Jamal’s family members are demanding a thorough investigation to clarify the contradictory accounts.

“The Palestinian official account is baseless,” the ambassador’s daughter, 30-year-old Rana Al-Jamal, told The Associated Press in a telephone interview from Ramallah in the West Bank. “The safe box has been in regular use — my mom (who lives there) told me that. The box was moved a day earlier and apparently something happened in the way.”

“We, the family, believe it is a crime, and we need to find out what happened,” she added.