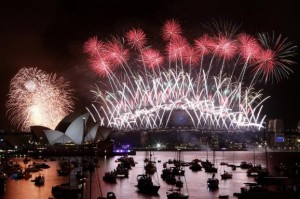 It’s 2014 in Australia, New Zealand and other places on the “other side” of the international date line.

“More than 1 million people crammed the Sydney Harbor foreshore on a warm summer night to watch the pyrotechnics show that appeared to live up to its billing as the most extravagant of Sydney’s already renowned annual display.” The Associated Press reported

So we at Ya Libnan want to wish everyone a happy New Year.
One thing to watch for: Dubai’s attempt to set a new Guinness World Record for biggest fireworks display. According to The Wall Street Journal:

“If all goes to plan, more than 400,000 individual fireworks will light up over the Gulf at midnight, beating a Guinness record of 77,000 set by Kuwait last year.”

Lets hope we will have peace in Lebanon at least till the end of 2013 .

May god bless all Ya Libnan readers and their families.

May God protect our country in 2014 and the years that follow.