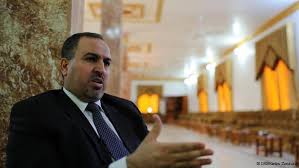 Iraqi troops on Saturday detained a Sunni lawmaker sought on terrorism charges and killed his brother and five of his guards after the six opened fire on the arresting officers. The incident, which is likely to add to sectarian tensions, also left an Iraqi soldier dead.

The arrested lawmaker,  Dr. Ahmed al-Alwani, ( pictured ) has been prominent among the organizers of Sunni protests against Iraq’s Shiite-led government over the past year. He is wanted on terrorism charges for inciting violence against Shiites who came to power after the 2003 U.S.-led invasion that toppled Saddam Hussein’s Sunni-led regime.

As military and security forces arrived at his home at dawn Saturday in the western city of Ramadi, Alwani’s guards and tribesmen opened fire, prompting a shootout that lasted nearly an hour, a police officer said. A spokesman for Iraq’s counterterrorism forces, Sameer al-Showaili, told state TV that Alwani surrendered after he ran out of ammunition.

In addition to those killed on the scene, 12 guards and five soldiers were wounded in the shooting. Six other guards were arrested, the officer said. A medical official confirmed the casualty figures.

Alwani’s bloc in parliament, Iraqiya, demanded his release and denounced the arrest as politically motivated, saying it was intended to benefit the bloc’s rivals in next year’s national elections.

Sunni lawmaker Salman al-Jumaili, who heads the bloc in the parliament, also accused the Shiite-led government of “agitating sectarian tension regardless of the consequences on the future of the country.”

Since last December, Iraq’s Sunni minority has been staging protests against what it claims is second-class treatment at the hands of the Shiite majority — protests that have been coupled with a rising wave of insurgent attacks across the country.