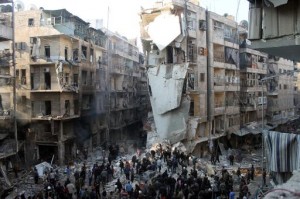 A Syrian army air strike on a vegetable market and a hospital in the northern city of Aleppo killed at least 25 people on Saturday, a monitoring group said, continuing a campaign of improvised “barrel bombs” that has drawn international condemnation.

One road hit by the strike was covered with debris from nearby buildings and was lined with bodies, as young men shouted for cars to help transport the wounded. The content of the video could not be independently verified.

Hundreds of people have been killed by air raids around the city of Aleppo in recent weeks, scores of them women and children, according to the Syrian Observatory for Human Rights, a pro-opposition monitoring group based in Britain.

On Saturday, the Observatory said 25 people, at least four of them children, were killed by barrel bombing that also destroyed part of a hospital. It said the death toll was likely to rise as dozens more were wounded in the attack.

Human rights groups and the United States have condemned the use of the improvised bombs – oil drums or cylinders which are packed with explosives and metal fragments, often rolled out of an aircraft’s cargo bay. They say it is an indiscriminate form of bombardment.

President Bashar al-Assad’s forces have been regaining territory southeast of Aleppo in recent weeks and have made gains in suburbs around the capital Damascus as well.

The move is likely an attempt to strengthen Assad’s position against the opposition ahead of planned peace negotiations in Geneva next month.

An army ambush in the Qalamoun mountains north of the capital killed at least 60 people on Friday. The Observatory said the dead were rebels. But the Syrian National Coalition, an umbrella group representing the opposition abroad, said the dead were civilians.

Well over 100,000 people have been killed in the 2-1/2-year conflict, which began as peaceful protests against four decades of Assad family rule. A fierce security force crackdown sparked an armed insurgency that has now spread civil war across most of Syria.