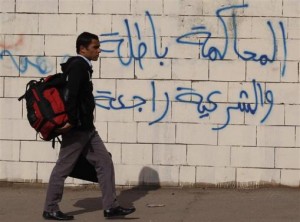 Egypt escalated its crackdown on the Muslim Brotherhood on Thursday, detaining at least 16 of the group’s supporters on charges of belonging to a terrorist organization the day after it was declared one by the government.

The activists were held in the Nile Delta province of Sharkiya on suspicion of “promoting the ideology of the Muslim Brotherhood group, distributing its leaflets, and inciting violence against the army and police,” the state news agency said.

The government declared the Muslim Brotherhood a terrorist group on Wednesday in response to a suicide attack a day earlier that killed 16 in the Nile Delta, accusing the group of carrying out the bombing. The Brotherhood condemned the attack.

Interior Ministry spokesman Hani Abdel Latif told state TV on Thursday that anyone taking part in Brotherhood protests would be jailed for five years. “The sentence could be death for those who lead this organization,” he added.

Earlier in the day a bomb explosion in Cairo wounded five people, and Latif said a second similar home-made device was found nearby and dismantled.

The government did not provide evidence to back up the charge that the Brotherhood had staged the Nile Delta attack in Mansoura, north of Cairo, which was claimed by the Sinai-based radical Islamist group Ansar Bayt al-Maqdis.

Ansar Bayt al-Maqdis has taken responsibility for several other major bombings, including a failed attempt to kill the interior minister in September.

The Brotherhood’s Islamist allies responded defiantly to the cabinet decision announced late on Wednesday, vowing to continue the protests it has staged against the army since the overthrow of President Mohamed Mursi.

“The putchists are a terrorist organiszation. The Brotherhood are peaceful patriots,” they said in a statement.

Wednesday’s move marked an escalation in the government’s campaign to suppress the Islamist movement that propelled Mursi to the presidency 18 months ago but has been driven underground since the army toppled him in July after big protests against him.

In the weeks after Mursi’s removal, the security forces killed hundreds of his supporters while dispersing their protest camps, and arrested thousands more including most of the Brotherhood’s top leadership.

Though the Brotherhood has been outlawed for most of its existence, this is the first time it has been formally listed as a terrorist organisation.

State prosecutors last week ordered Mursi and others to stand trial on charges including terrorism for which they could be executed. A Brotherhood activist, speaking on condition of anonymity for fear of arrest, said the new decision seemed aimed at deterring further protests against the government.

The cabinet said terrorism charges could be applied to anyone who finances or promotes the group “verbally and in writing”. Publication of the Brotherhood’s newspaper, Freedom and Justice, was halted in response to the decision.

“We will continue with the protests. Peaceful action is the hope,” said the activist from Alexandria.

The National Alliance to Support Legitimacy, the pro-Mursi coalition, called for a “week of anger” and the Freedom and Justice Party (FJP), the political arm of the Brotherhood, called for protests on Friday after the cabinet’s move.

The public prosecutor’s office, which is investigating the Mansoura bombing, said there would be no comment until its investigation was complete.

Bombings and shootings targeting the security forces have become commonplace, with around 350 soldiers and policemen killed. The state has declared itself in “a war on terror”.

Most of the attacks have been in the Sinai Peninsula, though the Mansoura attack suggested the violence is spreading to the more heavily populated areas of the Nile Valley and Delta.

The government has said violence will not derail its political transition plan. The next step is a mid-January referendum on a new constitution.

Photo: A student of Al-Azhar University walks along a wall covered with graffiti near a bus damaged by a bomb blast around the Al-Azhar University campus in Cairo’s Nasr City district December 26, 2013. That graffiti reads, ”Void the Mursi trial and give back our legitimacy.”