Ice storm leaves 500K without power in US, Canada 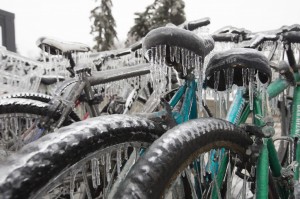 More than 500,000 homes and businesses were still without power Tuesday in parts of central and northeastern U.S. and into Canada after a weekend ice and snow storm rolled across the region. At least 14 people have been killed in the storm.

The U.S. National Weather Service said more snow was expected to move into the Northern High Plains and Central Rockies on Tuesday before rolling into the Great Lakes and Midwest by Wednesday morning.

In Canada, police said two people in Ontario are dead from carbon monoxide poisoning after using a gas generator to heat their blacked-out home northeast of Toronto.

Toronto officials said 90,000 customers were still without power Tuesday. While that was down from 300,000 people at the height of the weekend outages, some were likely to be in the dark until after Christmas.

The region was under a cold alert, with temperatures expected to be well below freezing Tuesday.

The number of customers in Maine without power spiked to more than 100,000 on Tuesday, even as Central Maine Power Co. sent more than 1,000 workers to help restore power throughout the state.

That was the case, too, in Michigan, where Jackson-based Consumers Energy — the state’s largest utility — said it hadn’t had this many outages during any Christmas week since its founding 126 years ago. Close to 17 percent of its 1.8 million electric customers lost power during the storm that hit late Saturday; roughly 157,000 remained without it Tuesday.