Man, son plummet from a 52-floor building in NYC 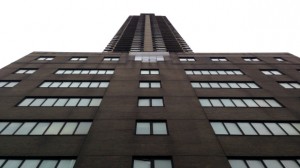 A man threw his tiny son off the roof of a Manhattan ( New York City) high-rise Sunday afternoon before jumping off himself, a police source said.

The 35-year-old man died after jumping from the 52-floor building in Lincoln Square around 12:05 p.m, but the boy showed signs of life, and was rushed around the block to St. Luke’s-Roosevelt Hospital .

“Measures were taken to try to save the boy immediately. Being so close to where it happened. However, he died in the emergency room,” said hospital spokesman Donald Maxton.

A police source identified the man as Dmitriy Kanarikov, 35. A neighbor said the child’s name was Kirill.

The bodies the man and the boy were found on the rooftops of separate buildings on 59th Street behind the South Park Tower rental apartment building from which they plummeted.

The building is close to Columbus Circle, and is surrounded by Fordham University between Lincoln Center and Tenth Avenue.

Somebody in the building who was on the 29th floor saw the bodies fall past and cops were searching for the baby’s mother, according to a police source.

“I work in the hospital. I heard a boom!,” said Adam Gutierrez, who works in the emergency room at the nearby hospital.

“The sound, the way it sounded, they must’ve jumped from high up.”