300 dead in 8 days of Syria air raids on Aleppo, report 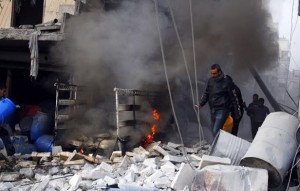 Beirut , Lebanon- — Syrian warplanes have killed more than 300 people, including 87 children, in an eight-day bombing campaign against rebel-held parts of the northern city of Aleppo, a monitor said Monday.

“From December 15 to 22, 301 people have been killed, including 87 children, 30 women and 30 rebels,” said the Syrian Observatory for Human Rights, which relies on a network of activists and witnesses on the ground to track the civil war.

Opponents of Syrian President Bashar al-Assad accuse his forces of dropping explosives-filled barrels on rebel-held areas in an effort to demoralise their supporters and turn them against the insurgents.

A security source told AFP on Monday that the army had adopted the tactic because of a lack of ground forces, and argued the heavy civilian toll was because the rebels were in residential areas.

Aleppo has been split between opposition and government forces since a massive rebel assault in the summer of 2012.

Human Rights Watch has accused government forces of using weapons and tactics that fail to distinguish between civilians and combatants, making such attacks “unlawful”.

On Sunday the main opposition National Coalition called on Western states to impose a no-fly zone to halt such attacks.

“Until Assad’s warplanes are stopped, the humanitarian disaster, regional instability, and the rise of extremism will only continue to get worse,” Munzer Aqbiq, an adviser to the Coalition’s president, said in a statement.

Photo: Rebels and civilians make their way through the debris after an air strike by pro-government forces on the Syrian city of Aleppo.