Body of British doctor who died in Syria arrived in UK 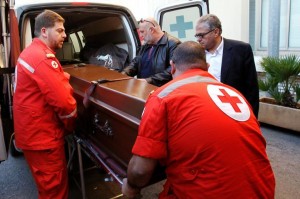 The body of British doctor Abbas Khan, who died while in custody in Syria, has arrived at London’s Heathrow Airport.

His body was brought to Lebanon on Saturday and returned to his family – almost a week after his death.

The 32-year-old father of two was arrested more than a year ago after traveling to the rebel-held city of Aleppo to treat injured civilians.

His family believe he was abused while in custody and have blamed the Syrian regime for his death, despite authorities in Damascus claiming he took his own life.

His brother and sister, Shahnawaz and Sara Khan, told Sky News that nobody has explained to the family how or why he died and that they feel he was let down by the British authorities.

Shahnawaz Khan told Sky News: “We are still unclear why there’s been such a protracted process in releasing his body.

“Everything that the Syrian government has done over these past 13 months to us has been arduous and has inflicted much insult upon us. I guess this was their final attempt to inflict as much misery upon us as they could.

“They had already embalmed him and carried out some tests that we had requested them not to.

“It has been a difficult time. We haven’t had a chance to grieve properly because we are still fighting to get him back.”

The married British surgeon was due to be released from prison and allowed home for Christmas.

Sara Khan said: “We still haven’t been given a clear explanation as to what happened to him, which is absolutely despicable, that the Syrians can feel that they can give us multiple explanations for his death.

“We want the British Government to help the family in getting those answers from the Syrians as somebody needs to own up for this absolutely cruel injustice that has been done to my brother.”

The family has criticized what they said was a lack of support given to them by the Foreign Office during Dr Khan’s incarceration.

Foreign Office minister Hugh Robertson has said: “There is no excuse whatsoever for the treatment that he has suffered by the Syrian authorities who have in effect murdered a British national who was in their country to help people injured during their civil war.”

Claims that the surgeon had picked sides and had jihadi links, and was in the country without a visa, were dismissed by his brother.

“The accusation of any sort of terrorist activities has never been levied to us,” Shahnawaz Khan said.

“There is no sense that he was ever involved in any sort of activities.

“The only reason why that question is raised is because he is a British Muslim, and throughout he has been treated with a degree of suspicion by their authorities and unfortunately the authorities in the British Government.

He added: “We will have to move on, but moving on now will include attaining some answers around the circumstances of his death and the steps that could have possibly saved him.”

Photo: Members of the Lebanese Red Cross carry the coffin of Abbas Khan, the British Surgeon who died in Syrian jail , following its arrival at Hotel Dieu Hospital in Beirut . His body was later flown to London Heathrow airport