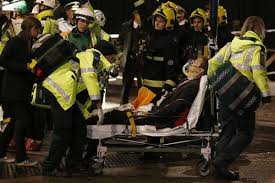 MORE than 80 people were injured, some seriously, when part of a ceiling in a packed London theatre collapsed during a show Thursday night.

A capacity audience of more than 700 people were in the Apollo Theatre, in Shaftesbury Avenue, for the National Theatre’s performance of The Curious Incident Of The Dog In The Night-time when people started screaming as parts of the ceiling appeared to cave in.

Eyewitnesses talked of “chaos and panic” as the theatre “began to crumble down” around them, leaving scores injured and a number trapped for a time.

Masonry from the Grade II-listed Apollo in the West End plummeted into the stalls below, striking members of the audience and filling the theatre with clouds of thick dust.

London said that 76 were injured seven of which had been taken to hospital with “more serious injuries”.

Eyewitnesses said they heard “a crackling” noise before the collapse.

Khalil Anjarwalla said he, his heavily pregnant wife and her parents managed to escape to safety after “kilos of concrete plummeted from the ceiling”.

Business owner Mr Anjarwalla said: “I was in the upper circle with my family when, about 45 minutes in, people started shouting and screaming. We thought it was part of the play. But the ceiling was crumbling.

“Within an instant, the whole roof seemed to come down.

“We saw a lot of people completely covered in dust – I could hardly breathe.”

A man who was in the theatre watching the show with his family said: “It was frightening. We were about halfway through the first half of the show when there was a huge noise and then a sheet of dust obscuring our view. It was very scary.”

One 29-year-old, who would only give his name as Ben, said: “It was about halfway through the first half of the show and there was a lot of creaking.

“We thought it was part of the scene – it was a seaside scene – but then there was a lot of crashing noise and part of the roof caved in. There was dust everywhere – everybody’s covered in dust.

“We got out fairly quickly, I think everyone was quite panicked.”

Amy Lecoz, who was at the theatre with her two children, aged 16 and 19, said: “The entire dome roof fell down on the audience just in front of us. We were protected by the balcony above and we ran. People started screaming.

People outside the theatre reported seeing members of the audience being escorted out of the building, some covered in blood, dust and debris. They said they saw families, including children, “crying, coughing and helping each other away”.

Emergency services were called to the scene shortly after 8:15pm, amid reports of many theatre-goers crying and trying to make contact with family members, as some were initially thought to be trapped inside the building.

Nick Harding from Kingsland Fire Station said: “A section of the theatre’s ceiling collapsed onto the audience who were watching the show. The ceiling took parts of the balconies down with it.

“Specialist urban search and rescue crews were also called to the scene to make sure no one was trapped.”

He added: “In my time as a fire officer I’ve never seen an incident like this.”

Firefighters said the theatre had been almost full and 720 people were watching the performance.

Police said a London bus had been used to take the casualties to hospital, while members of the public were asked to avoid the area.

Guy’s and St Thomas’ NHS Trust said 34 adults and five children were being treated at the accident and emergency department at St Thomas’ Hospital.

The majority of injured had suffered cuts and bruises, and a small number had fractures. The three most serious cases had injuries to the neck and back, or head.

The trust said at this stage there were no life-threatening injuries.

Prime Minister David Cameron tweeted: “I’ve been updated regularly on the Apollo incident. I’m grateful for the fast work of the emergency services in helping the injured.”

A district surveyor from Westminster City Council arrived at the scene to carry out a structural assessment of the building. It is thought the engineer, who was accompanied by police, would spend most of the night there, getting access to the inside of the theatre to ensure it was safe.

Council leader Philippa Roe said: “We are obviously shocked to hear the news and our immediate concerns are with the people that have been injured. Our officers are on site and they will help emergency services wherever they can.”

The Apollo, built in 1901, has had several owners. Most recently, it was bought in 2005, along with several other theatres, by Nica Burns and Max Weitzenhoffer, who created the Nimax Theatres group.