Ousted Egypt's Morsi to be tried over conspiracy 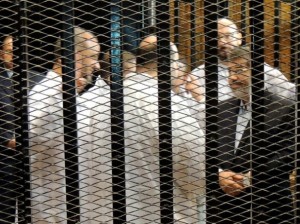 Egypt’s top prosecutor referred toppled Islamist President Mohammed Morsi to trial Wednesday for conspiring with the Palestinian group Hamas, Lebanon’s Hezbollah and others to carry out a campaign of violence in the Sinai Peninsula and beyond to destabilize the country following his ouster.

Prosecutors claim that while president, Morsi and his aides revealed state secrets to the militant groups and to Iran’s Revolutionary Guard. Morsi and 35 others, including the Muslim Brotherhood’s top three leaders, are also accused of sponsoring terrorism and carrying out combat training and other acts to undermine Egypt’s stability.

The charges, which refer to incidents as far back as 2005, carry the death penalty.

Mohammed el-Damaty, a defense lawyer for Muslim Brotherhood members, said the lawyers have not attended any of their clients’ interrogations and have no idea about the details of the charges.

No trial date has been set in the new case. Morsi is already on trial on charges of inciting the murder of his opponents while in office. Morsi was removed from office in July by the military, following days of mass protests demanding he step down. Morsi spent months in an undisclosed location before he appeared in court to face the incitement charges in November. That trial resumes in January.

In a statement Wednesday, prosecutors said their new investigation showed that the Brotherhood’s international branch has carried out violent acts in Egypt to create chaos. Prosecutors claimed the Brotherhood prepared a terrorist plot that involved smuggling weapons into the country and smuggling their own members into the Gaza Strip to receive military training from Hezbollah and Iran’s Revolutionary Guard to carry out operations in the Sinai.

Prosecutors said their investigation that showed the Brotherhood received funds from foreign countries. Investigators claim the plan began as earlier as 2005 and put it into effect in 2011 during the turmoil that accompanied the uprising against former President Hosni Mubarak.

Morsi’s senior presidential aides, also members of the Brotherhood, revealed state secrets by emails to group members abroad, as well as to Hamas, Iran’s Revolutionary Guard and Hezbollah, prosecutors claim. The prosecutors said Morsi was aware of the leaks.

Morsi is already under investigation over allegations he and the Brotherhood worked with the Palestinian militant group Hamas on a prison break that freed him and other members of the group during Egypt’s 2011 uprising. That attack killed 14 inmates.

At least 17 of the 35 people charged Wednesday with Morsi are on the run, prosecutors said.