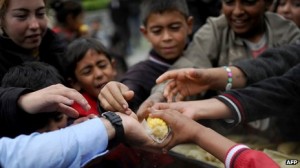 The United Nations said Monday it needs almost $13 billion to meet some of the world’s biggest humanitarian needs in 2014, and almost half of that amount would go to Syria and its surrounding region.

The request is meant to reach 52 million people in 17 countries, and is the largest amount that the U.N. and its partner agencies have ever asked at the start of the year to meet global humanitarian needs, officials said.

A year ago, the U.N.’s humanitarian request looking ahead to 2013 was for $8.5 billion, but Syria’s civil war forced them to revise that assessment upward to $13.6 billion. The U.N. and other officials said Monday that their 2013 request will be only 60 percent funded.

The U.N. admits that their funding request for 2014 is formidable, “but attainable.”

Amos said that Syria’s needs are greatest, and even if the nearly three-year-old conflict, which has claimed over 100,000 lives and displaced millions, ends tomorrow, “we would have to maintain help on the humanitarian front.”

Other major requests are for $591 million in Yemen, $406 million for Afghanistan, $390 million in the occupied Palestinian territories, $247 million for Central African Republic and $169 million for Haiti.