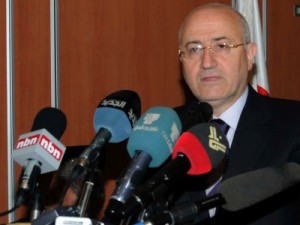 During a press conference at his office Aridi announced that he will “cease his caretaker role from cabinet and take a break from politics.”

National News Agency reported that Aridi briefed Ibrahim on the details of a press conference he made earlier this month in which he accused Safadi of withholding funds from his ministry for road maintenance in an effort to pressure him into approving a construction violation by the finance minister.

But Safadi has denied the allegations in remarks to several local TV stations. He accused Aridi of launching a political campaign against him.

The finance ministry said in a statement on Thursday that it was coordinating with the financial prosecutor.

Ibrahim has asked Safadi “to provide him with information pertaining to the finance ministry and nothing else,” it said in a statement.

Safadi’s hearing is scheduled to take place on Thursday, according to local media reports

“I did not make baseless accusations linked to this case,” Aridi added.

He also revealed that conflicting reports had been made by the concerned authorities and companies over whether the rain drains had been cleaned ahead of the advent of winter.

Moreover, he said that he was subject to “a lot of forms of pressure” over the corruption file, including suggestions to dismiss the issue.

“The truth in this affair should not be lost and the people’s interests should be preserved,” stressed Aridi who dismissed Safadi’s claims that the campaign against him was political .

“Officials who contacted me told me they knew I was right because many of the points I mentioned were brought up earlier in Cabinet…I do not believe things should be solved this way and I do not want the facts to get distorted,” Aridi added.