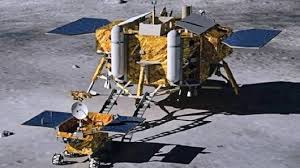 China landed an unmanned spacecraft on the moon on Saturday, state media reported, in the first such “soft-landing” since 1976, joining the United States and the former Soviet Union in managing to accomplish such a feat.

The Chang’e 3, a probe named after a lunar goddess in traditional Chinese mythology, is carrying the solar-powered Yutu, or Jade Rabbit buggy, which will dig and conduct geological surveys.

China has been increasingly ambitious in developing its space programmes, for military, commercial and scientific purposes.

It has moved in lock step with its emergence as a major global economic and political power.

“The dream for lunar exploration once again lights up the China Dream,” Xinhua news agency said in a commentary.

In its most recent manned space mission in June, three astronauts spent 15 days in orbit and docked with an experimental space laboratory, part of Beijing’s quest to build a working space station by 2020.

The official Xinhua news service reported that the spacecraft had touched down in the Sinus Iridum, or the Bay of Rainbows, after hovering over the surface for several minutes seeking an appropriate place to land.

A soft landing does not damage the craft and the equipment it carries. In 2007, China put another lunar probe in orbit around the moon, which then executed a controlled crash on to its surface.

China Central Television (CCTV) broadcast images of the probe’s location on Saturday and a computer generated image of the probe on the surface of the moon on its website. The probe and the rover are expected to photograph each other tomorrow.

The Bay of Rainbows was selected because it has yet to be studied, has ample sunlight and is convenient for remote communications with Earth, Xinhua said.

The rover will be remotely controlled by Chinese control centres with support from a network of tracking and transmission stations around the world operated by the European Space Agency (ESA).

For more than a decade, China has been modernising its economy and developing in areas long dominated by the West particularly the United States.

The moon landing will be seen as a demonstration of China’s ability to engage in sophisticated space operations with dual use potential.

China is also developing its own satellite system to rival the U.S. GPS system and has sold satellites to other countries.

The landing will also be a point of national pride in the country, which is undergoing difficult economic transitions.