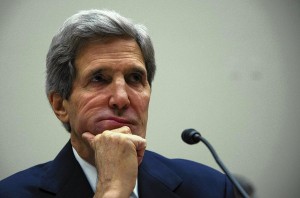 US Secretary of State John F. Kerry faced sharp complaints from House lawmakers Tuesday about the interim deal to rein in Iran’s nuclear program, but the Obama administration won two tactical victories in its campaign to fend off further sanctions that it says could jeopardize a final deal.

Sen. Tim Johnson (D-S.D.), chairman of the Senate Banking Committee, announced he had decided against introducing sanctions legislation, at least for now, that the administration had strongly opposed.

Johnson said President Obama and Kerry “made a strong case” to not undermine upcoming negotiations aimed at forging a comprehensive deal to eliminate any threat from Iran’s nuclear program.

Sanctions advocates also apparently failed in their efforts to attach an amendment to a must-pass defense spending bill.

Senior members of the Senate and House armed services committees brought out the joint bipartisan defense bill late Monday without any sanctions amendment and said they would bring the bill to a vote before the House adjourns Friday for the holidays.

That reduces the chances any new sanctions bill will pass this year. But congressional aides predicted a political battle in the weeks ahead between sanctions hawks and the administration.

Sanctions advocates had hoped “for a way through with these bills, but they’re going to have other ways available,” said one congressional staffer, who asked to remain unidentified because he was not authorized to speak about the issue.

The administration has lobbied Congress heavily to postpone new sanctions after six world powers signed a preliminary deal with Iran on Nov. 24 in Geneva. The interim accord gives Iran some sanctions relief in exchange for limited curbs on its nuclear program, and paves the way for six months of negotiations toward a more comprehensive agreement.

The six world powers fear Iran is seeking a nuclear weapons capability, despite its denials.

In his testimony Tuesday, Kerry tried to persuade the House Foreign Affairs Committee not to add more economic sanctions for fear that they could drive Iran from the bargaining table or alienate the five other world powers — Russia, China, Britain, France and Germany — which have cooperated in pressuring Tehran to limit its nuclear program.

“This is a very delicate diplomatic moment,” Kerry said. “We’re at one of those really hinge points in history.”

Several committee members complained that the interim deal conceded too much by allowing Tehran to continue enriching uranium at low levels suitable for nuclear energy, although it agreed to neutralize its stockpiles of medium-enriched uranium, pending a final deal.

“Iran from our standpoint does not need this technology to generate electricity,” he said. “It is exactly what they do need to make a nuclear weapon.”

Rep. Eliot L. Engel (D-N.Y.), ranking minority member, asked, “If Iran retains any enrichment capacity, how can we make sure that they will not forever remain on the brink of a breakout capacity?”

Obama contended at a public forum in Washington on Saturday that it was not realistic to expect that Iran would surrender all aspects of a multibillion-dollar enrichment program it has been expanding for more than two decades.

Kerry insisted Tuesday that low-level enrichment “is not locked in…. It depends on the final agreement.”

The diplomatic path could settle international concern over Iran’s nuclear program, Kerry said, and “the other path could lead to continued hostility and potentially to conflict.”

Kerry pointed out, in unusually blunt language, that the United States could destroy Iran’s enrichment facilities, as well as other parts of its nuclear infrastructure, if it believed Iran’s leaders had decided to race toward building a bomb.

“We have the absolute capacity, deployed now, to deal with that if we had to, from a military point of view,” he said. “And we could not only terminate those facilities, we could obviously set back their program for some time.”

Kerry also acknowledged, as Obama did Saturday, that the negotiations may not succeed.

“I came away from our preliminary negotiations with serious questions about whether or not they’re ready and willing to make some of the choices that have to be made,” he said.

Photo: US Secretary of State John Kerry testifies before the House Foreign Relations Committee on Capitol Hill in Washington, DC, December 10, 2013. Kerry Tuesday raised doubts if Iran was truly prepared to conclude a final deal with western powers on dismantling its nuclear program, but urged US lawmakers not to impose new sanctions. “I came away from our preliminary negotiations with serious questions about whether or not they’re ready and willing to make some of the choices that have to be made,” Kerry told US lawmakers. AFP PHOTO / Jim WATSONJIM WATSON/AFP/Getty Images