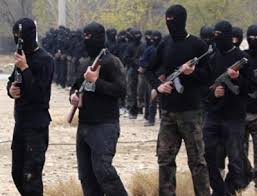 The U.S. government has suspended deliveries of aid to Syrian rebels after an Islamist group overran the main warehouses where the supplies were stored, the U.S. State Department said Wednesday.

The cluster of warehouses in the northern Syrian town of Atmeh served as the chief conduit for supplies into Syria for the Supreme Military Council, the Western-backed body that oversees moderate rebel factions fighting in Syria.

At the time of the takeover, the warehouses contained U.S.-supplied food, medical kits, some communications equipment and several pick-up trucks, typical of the items the United States is sending under a $16.9 million program to provide nonlethal aid to the SMC, U.S. officials and rebel officials said. They also contained sizeable quantities of small-arms ammunition from an unknown source, according to an opposition figure close to the rebels who asked not to be named because the subject is sensitive.

On Friday, the Islamic Front, a new alliance of Islamist groups that is now the biggest rebel organization in Syria, took over the warehouses after convincing the SMC-affiliated rebels who guarded it that they were in danger of attack by a group linked to al-Qaeda. It is unclear, however, whether there ever was a threatened attack. Some rebel groups have charged that the warning was a ploy to secure the warehouses and their contents.

A State Department official who spoke on condition of anonymity because he is not authorized to speak to the press said the status of the warehouse and the goods it contained is still not clear. In light of the confusion, the official said, a decision was made to suspend all of the non-lethal aid that the U.S. has promised to supply to rebels in northern Syria. Small amounts of food are being delivered to the south, but no other items, he said.

State Department spokesman T.J. Grubisha said the United States is “obviously concerned” by the seizure and is consulting with the SMC and the opposition coalition over future steps. Humanitarian aid, by far the largest component of U.S. assistance to Syria, is not affected, the statement said.

U.S. officials would not comment on whether the suspension applies also to covert, lethal aid consisting mostly of small arms and ammunition. Almost all of that assistance has been routed through Jordan to rebels in southern Syria, where the moderates are somewhat stronger than they are further north.

The nonlethal assistance has never amounted to enough to make a difference on the battlefield, where Western-backed factions are rapidly being eclipsed by more radical groups benefiting from more generous support from wealthy Gulf Arab donors. For the SMC, the loss of the warehouses could prove a fatal blow, rebel commanders say, by eliminating their main supply route into the north of the country.

The takeover of the warehouses comes at a time when efforts are underway to incorporate some of the Islamist groups under the umbrella of the SMC, to make it more representative of opposition forces fighting on the ground.

Negotiations are underway between the Islamic Front and the SMC over the future status of the warehouses, which may yet be returned, rebel officials say.

The Islamic Front does not align itself with al-Qaeda and is backed mainly by Saudi Arabia. Formed last month, it claims to represent at least 45,000 fighters and is now the biggest coalition on the ground. The Supreme Military Council, headed by the pro-Western Gen. Salim Idriss, has seen its support shrivel as rebel factions desert to join the better-funded Islamists.

Photo: Syrian rebels from an Islamist alliance formed last month. They have occupied bases and warehouses belonging to a Western-backed rebel group on the Turkish border.