Interpreter for deaf at Mandela memorial service was fake 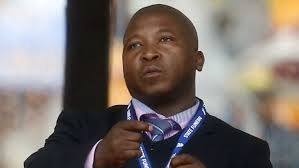 He made waves with his arms, touched his forehead and reached out with an embracing motion. And as the official interpreter for the deaf watching the Nelson Mandela memorial event on Tuesday, he stood right behind the world’s most powerful leaders including President Obama.

And he was a fake, advocates for the deaf say.

Web sites and radio shows here were flooded with condemnations of the African National Congress-led government and the organizers of the Mandela memorial event at FNB Stadium in Soweto for failing to figure out whether the man who claimed to be interpreting for the deaf was simply waving his arms around.

“Please get RID of this CLOWN interpreter, please!” Bruno Peter Druchen, head of the Deaf Federation of South Africa, tweeted during the memorial event at a stadium in Soweto.

[Read a transcript and get analysis of Obama’s speech]

“ANC linked interpreter on stage is causing embarrassment amongst deaf ANC supporters. Please get him off,” added Wilma Newhoudt, a deaf member of the South African Parliament and vice president of the World Federation of the Deaf.

But the man remained on stage and on Wednesday his performance became the focus of a new storm of criticism. People who phoned an afternoon radio call-in show said that it showed inept hiring, insensitivity to the deaf, and a serious security lapse on the part of the event organizers. And, they said, it marred the solemn event by distracting attention from Mandela and the world leaders who came to pay tribute to him.

It was not immediately clear who the man was or how he got on stage. According to the Associated Press, Collins Chabane, one of South Africa’s two presidency ministers, said the government is investigating and “will report publicly on any information it may establish.”

It was the latest controversy in a week devoted to remembering Mandela. President Jacob Zuma was booed by the crowd at the FNB stadium, rain kept “overflow” stadiums largely empty, and on Wednesday lines of people waiting to see Mandela’s body in state snaked their way through a hot, jam-packed parking lot while a single security check point slowed progress.

Many viewers of the Tuesday event noticed that the man was using the same gestures over and over again. Druchen tweeted that the man “is not using sign language at all.” 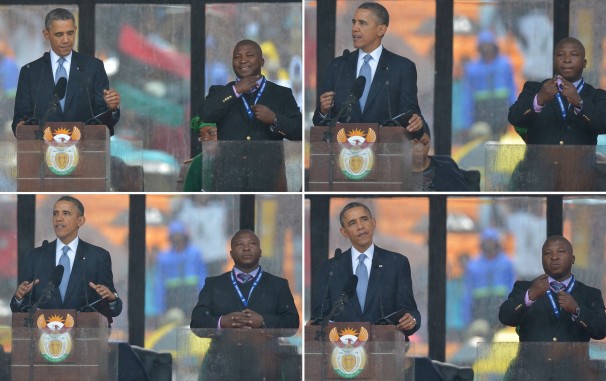 Sign language interpreter Francois Deysel tweeted, “please can someone ask the interpreter to step down from stage, it is embarrassing and making a mockery of our profession.”

Video clips show that this wasn’t the man’s first performance. He was the interpreter at the ANC’s Mangaung policy conference in the Free State last year. He interpreted the controversial song “Shoot the Boer” led by Zuma during his election campaign. When Zuma said people would run, the man pumped his arms up and down. Often his gestures were the same as Zuma’s. (Boer is a term for white Afrikaners.)

Druchen observed that the phony interpreter “knows that the deaf cannot vocally boo him off. Shame on him!”

Interpreters are not unusual in multilingual South Africa, where large groups of people speak either English, Afrikaans, Zulu, Xhosa or other African languages. Druchen recommended that sign be made the country’s twelfth official language.

Sign language interpreters and others in the United States and around the world also expressed outrage at the incident.

“We, along with many other organizations, are disappointed with the process that selected the interpreter that was shown on camera for the Mandela service, and feel that a great disservice was done to both the South African signing community, and the international signing community,” the Registry of Interpreters for the Deaf Inc., based in Alexandria, Va., said in a statement.

The World Association of Sign Language Interpreters, based in Australia, said: “This situation stresses the need for continued public education about the formal training required to be a qualified sign language interpreter and the need for interpreter and deaf associations to collaborate on pressing governments for standards.”

The National Association of the Deaf, based in Silver Spring, Md., said interpreters must be vetted.

“Each country has its own national sign language and sometimes even regional sign languages,” the association said. “In the United States, we use American Sign Language (ASL) while in South Africa, most people use South African Sign Language (SASL), which is distinct and uses different signs than ASL. We, at the NAD, cannot assess the qualifications or fluency or lack thereof of the interpreter in this video, but are informed by the South African deaf and hard of hearing community that this interpreter is not legitimately interpreting in SASL.”

One expert in the United States who reviewed video of the event said problems with the purported interpretation were easy to see.

“When I watch him, he appears to be doing a lot of repetitive hand motion. It doesn’t look like any natural sign language to me,” said Melanie Metzger, chair of the department of interpretation at Gallaudet University, a prominent school for the deaf and hard of hearing in Washington D.C. “What he’s doing is not matching the speaker. He’s not interpreting the speaker.”

Metzger said another tipoff was that the man onstage used minimal facial expressions. Authentic interpreters around the world, she said, make extensive use of eyebrows, cheeks and other parts of the face to communicate in sign language.
Washington Post