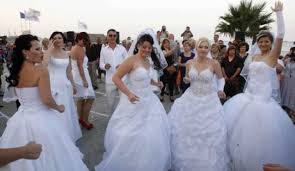 Cyprus, dubbed the “Island of Love” as the birthplace of the goddess Aphrodite, is a magnet for Lebanese and Israeli couples from across the water to tie the knot in a civil wedding.

“We don’t have the same religion,” shrugged Yohana, resplendent in a white dress fresh out of her suitcase.

The young Lebanese woman, a member of the Muslim Druze minority sect, arrived from Beirut with her Christian fiance — after a flight lasting less than half an hour.

Despite timid moves to legalise civil marriage back home, more and more couples from Israel and Lebanon are hopping over to Cyprus, which is mainly Greek Orthodox.

marriage has been legal ever since 1990 in the small EU island state, where a marriage licence issued by town halls costs less than 300 euros (about $400).

“Their families are very open with this (civil) wedding. The most important thing for them is that the couple is happy,” said Lilliya, a friend, after a brief ceremony.

In 2012, the town hall in the coastal resort of Larnaca, where the international airport is located, registered 423 marriages between Israeli couples.

And the number of Lebanese couples marrying in Cyprus doubled between 2007 and 2013.

Lebanese authorities recognise civil weddings only if they have been registered abroad.

In the narrow waiting room of the town hall, Nathaniel, an Israeli who described himself as an atheist, said he had travelled to Larnaca with 10 family and friends.

“It’s not a very big wedding, not a religious one, and since Cyprus is close to our country, we could take our close family with us,” said his beaming bride, Hili.

Her sister-in-law Rotem, who had a religious marriage in Israel, was happy for the couple. “In our country, there is a lack of options,” she conceded.

At the Cyprus Tourism Office, Antigoni Kapodistria, whose job is to promote so-called marriage tourism, sees the numbers growing.

“I don’t think civil marriage is going to be legalised anytime soon” in the island’s neighbours, she said.

According to her figures, couples getting married accounted for 8.5 percent of tourist arrivals in 2012, and this increased 13.7 percent between 2011 and 2013.

EU-recognised marriage licences, a lack of red tape and attractive package deals offered by travel agents are also pulling in the couples.

Many Israelis who are Jewish but were born abroad are also running into rabbis who refuse to marry them.

“My grandmother was born in 1903, before the October Revolution (in Russia), so her civil registrar is impossible to find,” Pavel said.

The young Israeli man born in Russia decided to take an early flight out of Tel Aviv bound for Larnaca with fiancee Gilatr.

His smart blue shirt contrasted with the backpack he carried, along with a map showing the short distance between the airport and the town hall.

The couple, who had travelled alone, said they would stay on for a long weekend on the beach.

Although some couples from Lebanon and Israel make a simple day trip of their wedding day in Cyprus, most stay on, to the delight of the recession-hit Mediterranean island.

Adding to the lure, the capital Nicosia offers historic buildings to host weddings, while Larnaca hands out trinkets for the couples to take home.

“It?s good for the town and for tourism. If they liked the ceremony and have nice memories, they will come back,” she said. 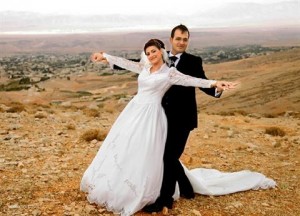 Lebanon may be next

The Lebanese Justice Ministry announced Thursday that it is currently preparing a draft law for civil marriage.

“The Justice Ministry’s Legislation and Consultancy Committee is preparing a draft law for civil marriage in Lebanon,” caretaker Justice Minister Shakib Qortbawi said during a seminar.

“The law that governs this kind of marriage must be a Lebanese one in order to register the marriage.”Qortbawi added.

Kholoud Succariyeh and Nidal Darwish, with the support of civil society activists, became the first couple in Lebanon to be wed in a civil marriage.
Caretaker Interior Minister Marwan Charbel signed their civil marriage certificate on April 25.

The Lebanese Supreme Council in the Ministry of Justice took an unanimous decision last February to consider legal all civil marriages conducted in Lebanon by people that do not have any religious affiliation.

Succariyeh and Darwish announced in January they had wed as a secular couple by having their religious sects legally struck from their family registers under an article dating from the 1936 French mandate.

While there is considerable support in Lebanon among the educated and secularists there is of course opposition .
Lebanese president Michel Suleiman, Maronite Christian welcomed the development and has been lobbying for a civil marriage law , on the other hand caretaker Prime Minister Najib Mikati, a Sunni Muslim rejected it .

Amongst the religious leaders Grand Mufti Sheikh Mohammed Rashid Qabbani went as far as issuing a fatwa against moves to legalize civil marriages inside the country. The other religious leaders were split on the issue.