Armenians protest against Putin as he visits 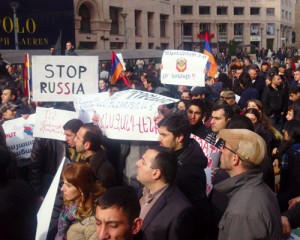 About 500 people marched through the capital of Armenia on Monday to denounce Russian President Vladimir Putin as he visited the country, and protested against plans to join a Moscow-led customs union, witnesses said.

Some of the crowd in central Yerevan held banners declaring “Putin, go home!” or “No to the USSR!”, a reference to Putin’s efforts to bind former Soviet republics together more closely in economic and security alliances.

Putin flew to the southern Caucasus country for talks on its decision in September to join the customs union with Russia, Belarus and Kazakhstan but began his visit in another city. He was due in Yerevan later on Monday.

The rally followed much larger protests in Ukraine, which suspended plans to sign a trade deals with the European Union last week and rebuild economic ties with Russia instead.

Kremlin critics in the West accuse Putin of putting pressure on Ukraine, Armenia and other former Soviet republics to back away from agreements that would increase their integration with the EU.

Police blocked a central street as the demonstrators headed closer to the headquarters of President Serge Sarksyan’s administration, and protesters handed over a letter urging the government to renounce its decision to join the customs union.