Death toll up to 26 from a Syrian helicopter strike

THE death toll from a Syrian helicopter strike on a rebel-held town near the northern city of Aleppo has risen to 26, activists said.

President Bashar Assad’s forces have been hitting rebel-held areas in the north hard in recent days, according to activists. They say such strikes often precede government offensives.

The Britain-based Syrian Observatory for Human Rights said the aircraft targeted a compound of the rebel group known as the Tawhid Brigade in the town of al-Bab. The bombs missed their target and hit the Nafasin market instead, killing 26 people, most of them civilians and including four children. Three of those who died in the attack were rebel fighters, said Rami Abdurrahman, who heads the Observatory.

A government offensive in the north would be the latest push by Assad’s forces to recapture territory ahead of peace talks planned for January in Geneva. The opposition currently holds large swathes of territory in the north, including along the border with Turkey, as well as whole districts of Aleppo, Syria’s largest city and its commercial centre. 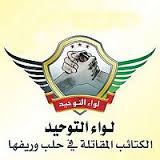 The Observatory group initially reported six dead from the Saturday’s attack. It raised the death toll to 26 on Sunday when it received more information on the attack from activists on the ground.

The Tawhid Brigade is one of Syria’s best known and powerful rebel groups, with an estimated 10,000 fighters. It’s particularly strong in Aleppo province.