6 killed in shelling of a northern Syrian town market 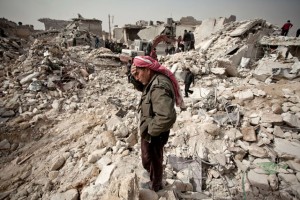 Activists say government shelling of a market in a northern Syrian town has killed at least six people.

The attack happened Saturday in al-Bab near Aleppo, Syria’s largest city. Rami Abdurrahman of the British-based Observatory for Human Rights and an Aleppo-based activist who goes by the name of Abu Raed said at least six people were killed.

They expect casualty figures around the town to rise as government forces struck elsewhere Saturday within opposition-held areas near Aleppo.

Abu Raed said the strikes in al-Bab likely were part of preparations by forces loyal to Syrian President Bashar Assad as they prepare to strike opposition strongholds in Aleppo.

Abdurrahman obtains his information from a network of activists on the ground.

Photo: A Syrian man stands on the rubble of his house while others look for survivors and bodies in the Al Bab district of the northern city of Aleppo on Saturday