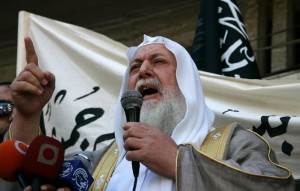 Salafist Sheikh Dai al-Islam al-Shahhal on Monday called for ending Hezbollah’s continued involvement in the Syrian crisis and said the security of Sunnis was a “red line.”

“I call on wise men in Lebanon to declare a clear and strict position and take useful measures to prevent Hezbollah from intervening in the increasingly sectarian Syrian civil war , in order to spare this country and its citizens,” Shahhal said at a press conference.

He also called for “providing security and stability in Lebanon by achieving justice and refraining from intervening in others’ affairs.”

“Our security, our Sunni sect, and our doctrines, values, and dignity are all red lines,” stressed al-Shahhal.

He continued: “Our families and brothers everywhere will not stand idly before any targeting of any area.”

Thousands of Hezbollah fighters have been backing troops loyal to President Bashar Assad against the mostly Sunni rebels seeking to topple him, despite the Baabda declaration which calls for distancing Lebanon from regional conflicts .