by yalibnan
433
By Tom Fletcher, Dear Lebanon, I wanted to write to say Happy 70th birthday.I know that in reality you have been around thousands of years, and were trading and writing long before my ancestors.
Share: 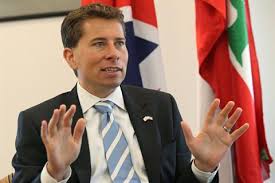 I know that in reality you have been around thousands of years, and were trading and writing long before my ancestors. But that moment of your birth in November 1943 was special, different – you took your first steps as a new nation founded on uniting principles rather than lines of division.

I’m proud that my predecessor, Edward Spears, was there to support that, and that we believed as strongly then as now in the idea of Lebanon.

The thing is, Lebanon, do you still believe in that idea? This is a question only you can answer. Without doubt, it has been a bumpy seven decades, with troublesome teenage years and plenty of midlife crises, to put it mildly.

You now face another tough year, and rising anxiety that regional rifts can drive you apart once again. We have been reminded this week that there are plenty of people who want that to happen.

I hope that you’ll forgive a bit of feedback, from one of your admirers.

You’re so much better than you admit. Look back at those seventy years. Your writers, musicians, thinkers and businesspeople have conquered the world again and again.

Your mountains, valleys and coasts are the envy of all of us. You have an extraordinary unquenchable spirit. You have found a way to move on from a devastating civil war, almost as though it never happened.

You are the world’s best networkers, in a century that will be run by networks. You are also the most exceptional hosts, not just to ambassadors but also to the hundreds of thousands of Syrian refugees who have arrived in the last two years.

Whatever your religion, there are few more beautiful sounds than the intermingling of the call to prayer and church bells. Every day I meet extraordinary Lebanese people doing great things against the odds.

But I’m also frustrated, and I know that many of you are.

Your politics are dynamic on the surface. Yet broken and paralysed beneath it. You talk of unity. Yet often say things like ‘Lebanon would be wonderful if it wasn’t for the Lebanese’, ‘it will always be like this – this is Lebanon’, or ‘they (insert different group) are just too different’.

You have an impressive ability to absorb hardships such as power cuts. Yet you rarely confront the causes of them. You invest more than any country in the education of your youth. Yet they feel excluded from changing the country for the better. You have been a beacon for women’s rights.

You were the first country in the region to stand up against dictatorship and tyranny in the 21st century Middle East. Yet your voice in calling for your own rights and those of others seems to have fallen silent, and in too many cases been silenced.

Yet only elect a tiny handful to parliament. You were the first country in the region to stand up against dictatorship and tyranny in the 21st century Middle East. Yet your voice in calling for your own rights and those of others seems to have fallen silent, and in too many cases been silenced.

So here’s some unsolicited advice.

First and most important, start ignoring advice from outsiders, including me: this is your country.

Second, celebrate the success that is all around you – yes, the talented and inspirational athletes, thinkers, explorers and activists. But also the grafters who tell me on the school run, in the street, shops, schools or hospitals – ‘this is our country, we share it, and carrying on our lives is the best response to violence and division’.

Third, why not use this 70th anniversary of independence to remember what independence meant and should still mean – that you’ll prioritise national interests, Lebanese interests, over those of foreign patrons? And demand that your leaders do too?

Fourth, maybe it is time to renew those marriage vows, to spend a moment reflecting on what you admire rather than what infuriates you about each other. You’re stuck together I’m afraid, for richer or poorer, for better or for worse.

Finally, don’t forget your collective strengths. You may have difficult neighbours and a tendency to fatalism. But your location and diversity put you at the hub between continents and cultures. Your history gives you a resilience and free spirit that others in the region would die for, and are dying for.

Many of us are rooting for you. The UK is doubling trade, increasing tenfold our support to the army’s stabilisation effort, and running our largest ever humanitarian effort to help you cope with the refugee influx. The Security Council, far from fighting their battles here, have come together repeatedly to prioritise your stability, and to provide peacekeepers, aid, political support.

For many of us you’re too important, and too special, to let fail. If coexistence proves impossible in Lebanon, how can we be confident that it will work elsewhere?

I’m still buying shares in Lebanon 2020. All I encourage, humbly, is that you do too.

You’re at a moment of jeopardy. 70 is too young for a country to retire. You can’t just botox away the cracks. Whether you make it to 75 depends on whether you can find a way to regroup, to focus again on what unites rather than divides you.