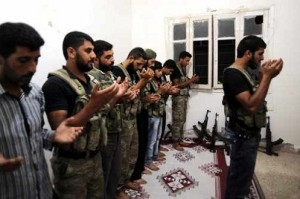 The six largest Islamist rebel factions in Syria declared a new Islamic Front on Thursday, forming the largest alliance of opposition fighters yet in the 2-1/2-year conflict.

Syria’s fractious rebel forces have tried many times to unify their ranks and failed. Islamist rebel commanders, in a video aired on al Jazeera, said their new union would not only seek to oust President Bashar al-Assad but establish an Islamic state.

“This independent political, military and social formation aims to topple the Assad regime completely and build an Islamic state where the sovereignty of God almighty alone will be our reference and ruler,” said Ahmed Eissa, who heads the Suqour al-Sham brigades.

The merger undermines the secular Free Syrian Army (FSA) leadership, once seen as a symbolic umbrella leadership for all the rebels but weakened by infighting and defections.

It could also challenge the ascendance of al Qaeda-linked factions who have grown increasingly powerful as other rebel groups are weakened.

Among the main groups that joined the front are powerful, countrywide forces such as Ahrar al-Sham, Suqour al-Sham and Islamic Army. The Tawhid Brigade, which spearheaded the August 2012 offensive that saw rebels take large swathes of the city of Aleppo and other parts northern Syria, was another leading member. The groups are not seen as being as hardline as the Qaeda-linked rebels.