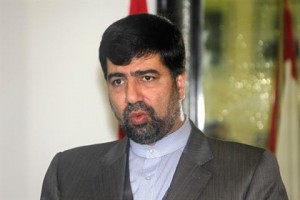 The twin suicide bombings in Beirut appeared aimed at killing the Iranian ambassador and heavily damaging the country’s embassy, but they fell short of their targets, Lebanese officials said Wednesday.

The death toll from the bombings rose to 25 from 23 on Tuesday as two bodies were recovered, the health ministry said.

“The investigation is ongoing, but it is very likely the ambassador was the target,” a Lebanese military official said.

Lebanese security officials and politicians across the spectrum described the bombings as a bold and unprecedented attack against the interests of Iran and its local ally Hezbollah, the Lebanese Shiite militant group. The violence deepened fears that the regional proxy war over Syria is poised to play out in new and even more deadly ways in Lebanon.

“We have entered a totally new phase, security-wise. The Syrian war is now here,” said Nohad Machnouk, a member of parliament with the anti-Hezbollah Future Movement. “It will be more bloodshed—blood, blood and more blood until there is a way forward in Syria.”

New details about the attack emerged from interviews with witnesses and security officials.

Military and security officials said the first bomber intended to clear a path for a car with a second, larger bomb to ram into the embassy. But a pickup truck abandoned when its frightened passengers fled after the first explosion blocked the way of the second bomber’s car, foiling an apparent plan to crash his car into the embassy.

On Tuesday, Lebanese officials said the first suicide bomber on a motorbike detonated himself outside the embassy gate, before a second suicide car bomb went off a few feet away.

But witnesses and officials said Wednesday that the first bomber arrived on motorbike, parked it, and ran toward the gate, blowing himself up somewhere along the way. He killed four guards at the gate.

A white Toyota pickup truck delivering plastic jugs of water to homes in the neighborhood was about 10 feet from the gate. The driver and a passenger both jumped out and ran in the minutes after the first blast, abandoning the vehicle, according to officials at the scene.

When the second bomber drove down the street minutes later, the abandoned water truck blocked his way, these officials said. The bomber rammed his car into the pickup truck several times in an apparent attempt to plow through it, security officials said, prompting guards at the embassy gate to shoot at him. Soon after, he blew himself up on the spot, they said.

The driver and the passenger of the water-delivery truck were both killed while trying to flee, officials said. The pickup truck remained on the street on Wednesday afternoon, a clipboard holding order sheets still on the driver’s seat. A few feet away, a crater from the car bomb was cordoned off by barricades.

Footage from security cameras down the street, first broadcast by television channels controlled by or sympathetic to Hezbollah, showed the sudden impact the moment the second bomb exploded, shaking buildings and sending people running before a black cloud descended over the street.

An al Qaeda-linked Sunni radical group that claimed responsibility for the attack is known to operate in Lebanon but has never staged this kind of operation. A leader of the group said Tuesday it was a revenge attack for Hezbollah and Shiite-dominated Iran’s support for the Shiite-linked regime in Syria, which is fighting a civil war with mostly Sunni rebels.

Hezbollah officials didn’t comment beyond statements by some Hezbollah lawmakers on Tuesday who blamed Israel and what they called its radical Sunni accomplices for seeking to annihilate them and all others who don’t abide by extremist Sunni ideology.

Al Joumhouriya newspaper, a Lebanese daily founded by a former defense minister, quoted sources close to the Hezbollah leadership saying the bombings marked the start of a “new phase that we consider more dangerous.”

“It is the phase of suicides, in which no precautions are sufficient. But we will take exceptional precautions because things have changed for us.”

The last bombing of an embassy in Lebanon was the 1983 U.S. embassy bombing in Beirut when the country was in the midst of a 15-year sectarian civil war from 1975-1990.

On a street known as “Embassies Road,” where five embassies or consulates including Iran’s are located, Shiite militiamen dressed in black, vested civil defense workers, and neighborhood residents surveyed the aftermath of the bombings.

Glass shards rained down from stone balconies as people tried to clear debris from four residential buildings on the block, mostly abandoned after the attacks.

The black, cast-iron gate of the Iranian embassy, near to where the first bomber struck, was replaced after it was heavily damaged, guards at the gate said.