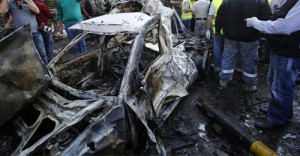 Saudi Arabia condemned on Wednesday the blasts that targeted the Iranian embassy in Beirut, slamming it as a “terrorist and cowardly act.”

SPA added: “The Kingdom offers its sincere condolences to the families of the victims and to the Lebanese government and people, and we wish the wounded a quick recovery,”

“Saudi Arabia reassures its position that condemns terrorism in all its forms, regardless of who’s behind it and the reasons for it.”

An al-Qaeda-linked group in Lebanon claimed responsibility for an attack Tuesday on the Iranian embassy in southern Beirut that killed 23 people, including an Iranian cultural attaché.

The dual blasts outside the fortified compound injured 146 people, the Health Ministry said. Lebanese television cited Iranian diplomatic sources as saying none of the staff inside the embassy was hurt, Reuters reports.

The obscure group Abdullah Azzam Brigades claimed responsibility for the attack in a post on Twitter and on a militant website. The group said it will continue the attacks until the Iranian-backed Shi`ite group Hezbollah withdraws its fighters from the Syrian civil war.

The Iranian foreign ministry and Hezbollah accused Israel of being behind the bombing while the pro-Hezbollah Lebanese newspaper Al-Akhbar blamed Saudi Arabia, Iran’s regional arch-rival, for the attacks, which it described as “a royal gift” from the monarchy in Riyadh to Tehran.