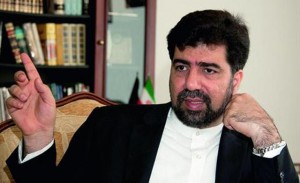 Beirut, Lebanon – Iran’s ambassador to Lebanon narrowly escaped a twin suicide bombing outside his embassy that killed 23 people including his aide, a diplomatic source told AFP on Wednesday.
“Ambassador Ghadanfar Roken Abadi was on his way [Tuesday] with cultural advisor Ibrahim al-Ansari to see the Lebanese Culture Minister Gaby Layoun,” the Iranian diplomatic source in Beirut told AFP, speaking on condition of anonymity.

“The advisor was waiting in the car near the entrance when the first suicide attacker detonated himself. The ambassador, who would have left the building within a minute, went back,” he added.

Ansari was seriously injured in the attack, and later died from his wounds, according to a Lebanese hospital source. Tehran has yet to confirm the news of his death.

The twin suicide attack was claimed by an Al-Qaeda-affiliated group and is the first of its kind against Iran, a close ally of President Bashar al-Assad, since the outbreak of Syria’s conflict.

Iran has deployed military experts in Syria and supports Lebanese Shiite Hezbollah, which has sent fighters across the border to support Assad. Iran also backs Iraqi militias that fight alongside Assad’s troops.

The neighborhood had already suffered two summertime attacks, including one which left 27 people dead.

Army tanks meanwhile on Wednesday cordoned off the street where the bombers had struck, as investigators collected evidence.

Residents were seen inspecting and repairing their homes while the streets remained clogged with debris.

The Lebanese press ran headlines Wednesday that focused on the face-off between Lebanese supporters and opponents of the Assad regime in Syria, which for two and a half years has been fighting a ruthless war against a full-blown insurgency.

“Al-Qaeda vs Iran: the face-off in Lebanon,” was An-Nahar daily’s headline.

Pro-Hezbollah newspaper Al-Akhbar meanwhile blamed Saudi Arabia, Iran’s regional arch-rival, for the attacks, which it described as “a royal gift” from the monarchy in Riyadh to Tehran.