by yalibnan
564
When the Syrian uprisings began nearly three years ago, the one thing that those in Lebanon felt sure of was that the conflict would eventually leak across the border.
Share: 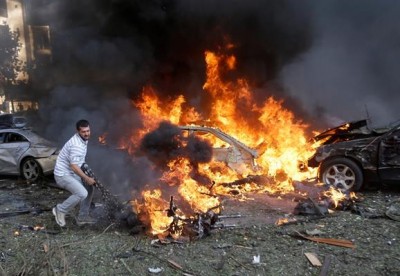 When the Syrian uprisings began nearly three years ago, the one thing that those in Lebanon felt sure of was that the conflict would eventually leak across the border.

The coordinated suicide bombings in Beirut on Tuesday, which killed Iran’s cultural attaché and more than 20 other people, are just the latest demonstration of that terrible certainty. They are the product of a proxy war in the country that mirrors the themes, if not the scale, of the dire conflict that continues in Syria.

Responsibility for the bombings was claimed by the Abdullah Azzam Brigade, a Sunni insurgent group with links in Al Qaeda, and the target was the Iranian embassy. The Islamic Republic has been one of the Assad regime’s staunchest supporters both politically and militarily.

It was just the latest tit-for-tat attack between groups linked to pro- and anti-Assad forces in Lebanon and the country is now at risk of losing the delicate peace that has survived since the country emerged from its long civil war two decades ago.

Behind this extended truce is a power-sharing agreement between the country’s ethnic and religious groups, and its continuation is all the more notable for having overcome significant challenges. Most noteworthy was the 2005 assassination of Rafiq Hariri, Lebanon’s former prime minister, which a UN-backed criminal tribunal blamed on Hizbollah.

The question now is whether this peace, having proven to be resilient even in the situation of the assassination of a major political leader, might be susceptible to this overflow of the Syrian conflict.

One difference is Hizbollah’s role in Syria has, unusually, been overt. The militia fought alongside Syrian army forces in May and June to take back the strategically important rebel-held Syrian town of Qusayr.

Now those in Lebanon wait to see how pro-Iranian and pro-Assad factions will respond to Tuesday’s bombings.

The worst-case scenario will be the nation sinking back into the dark abyss of domestic conflict, condemning the Lebanese to the same kind of grinding and interminable despair that they have just begun to overcome.

Originally published in The National