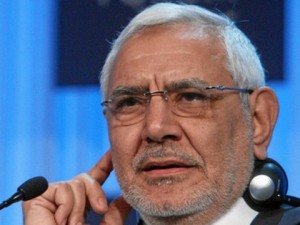 A reformist Islamist leader said Monday that Egypt’s army chief should not run for president in next year’s expected election, telling The Associated Press such a move would block transition to democracy.

“If the nomination for the contest takes place amid this rabid media campaign, portraying him as a savior and the army as rescuer, we will never move to democracy,” said the 62-year-old physician-turned-Islamist activist in an interview

“As long as the army leadership insists to remain in the swamp of politics … there will be no democracy,” said Abolfotoh, who quit Morsi’s Muslim Brotherhood group in 2011 and later ran against its will in 2012 presidential elections that Morsi won.

An adversary against hardliners within the Brotherhood, Abolfotoh had taken a more inclusive line, believing in the freedom of atheism for example and even saying he would accept a Christian president — unlike the Brotherhood.

Abolfotoh played an important role rebuilding the Brotherhood in the 1970s after a period of repression. He has been jailed in the past, the longest time being five years under then-President Hosni Mubarak for membership in the banned group.

His critics see him an undercover Brotherhood proponent, one who could rebrand the group and bring it back to politics. Abolfotoh denies the charge categorically.

“The Brotherhood is a failed organization, politically speaking, it has no future vision and its administration is the worst,” he said.

Since Morsi’s overthrow, the group has held near-daily street protests demanding his reinstatement. Its supporters were blamed for a string of retaliatory attacks targeting churches and assassinating security figures, including a failed attempt on the interior minister in September.

“They are not able to stop the coup and the coup is not able to curb them … we are in a zero-sum game,” he said from his villa in a Cairo suburb.

Since the coup, a pervasive personality cult has grown around el-Sissi, who deposed Morsi on July 3. Calls for el-Sissi to run for president next year are gaining momentum.

The military backed transition plan calls for the amending of the Morsi-era constitution, followed by presidential and parliamentary elections early next year. El-Sissi and the interim government have led an extensive campaign to cripple the Brotherhood, imprisoning its leaders and rounding up thousands of its members. A court also outlawed the group and all branch associations in an effort to break its vast social services network — a pillar of its support at the ballot box.

Abolfotoh believes that repression has only glued the group’s members together.

“The repression of any ideological group makes them stronger,” he said, describing such action as “stupidity” that will backfire. He said that the interim authorities’ heavy crackdown on the Brotherhood is only making it stronger as an organization.

In his eyes, the military led by el-Sissi pre-empted a popular movement that would have eventually toppled Morsi and his group itself.

On June. 30, millions took to the streets demanding Morsi step down, saying he had abused power and only served his group’s agenda. Four days later, the military announced the coup.

“If they (the military) had left it to politics, we would have taken (the Brotherhood) down,” he said, adding, “the best way to weaken the group would have been through fair elections.”

Unlike many in Egypt who think the Islamist movement is finished, Abolfotoh believes it will eventually return to politics.

Islamists swept the country’s first parliamentary elections after autocrat Mubarak was overthrown in a 2011 uprising.

Abolfotoh estimates that such a victory won’t be repeated, although Islamists would maintain substantial support among voters as long as there is no “viable” alternative to them. He forecast they have enough support to win 40 percent of seats in parliament.
ABC/AP