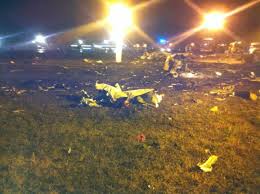 A passenger plane has crashed at an airport in the Russian city of Kazan, killing all 50 people on board.

The Boeing 737 had taken off from Moscow and was trying to land but exploded on impact at about 19:20 local time (15:20 GMT), officials said.

The Emergencies Ministry said there were 44 passengers and six crew members on the Tatarstan Airlines flight.

Investigators are now looking at whether a technical failure or crew error may have caused the crash.

It was raining in Kazan when the aircraft crashed.

Among the dead was Irek Minnikhanov, a son of the president of the Russian Republic of Tatarstan, according to the official passenger list.

Map
Aleksander Antonov, who headed Tatarstan’s branch of the Federal Security Service, was also among the passengers.

Russian President Vladimir Putin “expressed his condolences to the relatives of the victims in this horrible disaster”, his spokesman Dmitry Peskov was quoted by the news agency Interfax as saying.

A government commission has been set up to investigate the cause, he said.

The crew had said they were not ready to land because of technical problems, Russian news agencies report.

A journalist who said she had flown on the same aircraft from Kazan to Moscow earlier on Sunday told Russia’s Channel TV that there was a strong vibration during the landing in the Russian capital.

“When we were landing it was not clear whether there was a strong wind, although in Moscow the weather was fine, or some kind of technical trouble or problem with the flight,” said Lenara Kashafutdinova.

“We were blown in different directions, the plane was tossed around. The man sitting next to me was white as a sheet.”

The plane had been in service since 1990, Russian officials are quoted as saying by the local media.

The airport in Kazan – the capital of Tatarstan – has been closed since the accident and is not expected to re-open until Monday afternoon.

Family members and friends of the victims are getting help by a team of psychologists. The government also promised financial compensation.

The BBC’s Daniel Sandford in Moscow says that although some of Russia’s biggest airlines now have very good reputations, frequent crashes by smaller operators mean the country has one of the worst air safety records in the world.