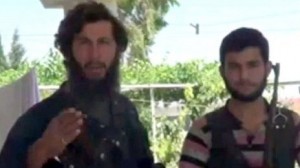 Radical anti-government fighters in Syria mistakenly beheaded a wounded fellow rebel soldier after assuming he was a supporter of President Bashar al-Assad, according to an online statement from the radical fighters’ group.

A separate online video showed a gruesome display of radical fighters holding what appeared to be the victim’s head.

After the beheading earlier this week, the victim was determined to be Mohammed Fares, an anti-government fighter wounded in clashes against the Syrian Army earlier, according to the Syrian Observatory for Human Rights.

On Thursday, an online statement from a spokesman for the al Qaeda-affiliated Islamic State of Iraq and the Levant (ISIS), whose fighters apparently carried out the beheading of Fares, called for forgiveness for the killers and asked for “restraint and piety” from anti-government supporters.

“We call on God to accept Mohammed Fares into his Kingdom and to forgive his brothers that sought to rid us of the enemies of God and our enemies,” Omar Al-Qahatani said in Arabic in the ISIS statement.

Fares apparently shouted the names of two revered figures in Shiite Islam when he arrived wounded in a makeshift hospital, prompting the overwhelmingly Sunni opposition to assume he was a government fighter, Al-Qahatani added in the statement.

In the separate online video, two fighters from ISIS are seen displaying what appears to be the decapitated head of a bearded man to a crowd in Syria’s commercial capital of Aleppo.

“He is an Iraqi Shiite volunteer fighter in Bashar al-Assad’s army,” a young man brandishing a knife in one hand and holding the decapitated head in another says in Arabic to a group of men all dressed in black.

“If they (al-Assad’s army) enter they will not distinguish between supporters and opponents. I swear they will rape the men before the woman,” another jihadi fighter continues in the amateur video.

The incident comes as deadly clashes and infighting continues between extremist opposition factions and more secular rebel brigades, potentially weakening the armed movement against al-Assad and further threatening the safety of civilians caught in the conflict.

Human rights groups and some member of the Syrian opposition have condemned what they deem barbaric actions by ISIS including the alleged execution of wounded government soldiers, the shooting of a 15-year-old boy for blasphemy, and public flogging of women for behavior deemed to violate Sharia law.