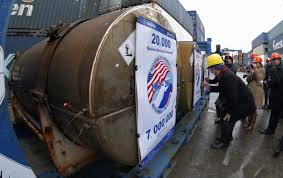 A 20-year-old deal that has powered American homes while reducing the risk of Russian nuclear material falling into the wrong hands approached its end on Thursday when the final shipment of uranium left St Petersburg for Baltimore.

Under the 1993 HEU Purchase Agreement, Russia downblended 500 metric tons of highly enriched uranium (HEU) from nuclear weapons into low-enriched uranium and sent it to the United States, where it was made into fuel for nuclear power plants.

Over much of the life of the deal, it was used to generate roughly half of all commercial nuclear energy produced in the United States, or nearly 10 percent of all U.S. electricity, according to the U.S. Energy Department.

“For two decades, one in 10 light bulbs in America has been powered by nuclear material from Russian nuclear warheads,” Energy Secretary Ernest Moniz said of the agreement, commonly known as Megatons for Megawatts.

It provided cash and jobs in Russia’s nuclear industry at a time, after the 1991 Soviet collapse, when fears ran high that impoverished scientists would sell secrets or “dirty bomb” ingredients.

It was “crucial for stabilizing the Russian nuclear complex at a critical time in the 1990s,” said Matthew Bunn, a Harvard University professor and expert on nuclear security and proliferation.

He called it “perhaps the most successful U.S.-Russian cooperative effort to reduce nuclear dangers”.

But times have changed. A richer Russia, while seeking to expand its nuclear energy industry, has resisted U.S. efforts to extend the agreement or come up with another one to continue blending down HEU, Bunn said.

The deal was done when Russia wanted financial aid from the West. President Vladimir Putin, in power since 2000, has made a point of rejecting handouts and demanded that the United States treat Russia as an equal.

“It is too bad … that Russia has not decided to blend down substantial additional quantities of highly enriched uranium,” Bunn said. “They still have far more than is plausibly needed for their military programs.”

Despite arms control treaties such as the 2010 New START pact, Russia and the United States possess more than 95 percent of the world’s nuclear weapons. Neither nation discloses how much highly enriched uranium it has.

But statements by Russian officials have suggested the 500 metric tons eliminated under the deal may have been slightly less than half of its total stockpile, which would leave it with enough HEU for thousands of warheads.

Rosatom’s mining arm said on Wednesday that it would freeze expansion projects due to low prices.

But Novikov suggested the lack of desire to take steps without U.S. reciprocation was also a factor, saying Russia was the only country to have blended down 500 metric tons of HEU. “Why should we do even more?” he added.

Moniz said Russia’s total revenue under the program was about $17 billion. He said the United States had blended down more than 140 tons of its own HEU and had made a commitment to bringing that to more than 180 tons.

The end of the agreement will also affect the uranium market in the United States, where under deals negotiated to end a trade complaint, Russia will now only be able to supply about a quarter of the market.

Moniz and Bunn said participants had had plenty of time to adjust because they had known the program would end when 500 metric tons were shipped.