Philippines: Typhoon Haiyan by the numbers 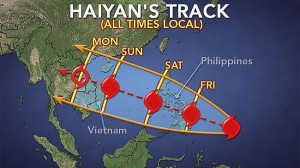 Here’s a look at the figures that you need to know.

Provinces impacted: 41 of 80 in the Philippines

Islands that make up the Philippines: 7,000

Wind speed of storm: 150 mph in Philippines; 75 mph as Haiyan made way across Vietnam border into China’s Guanxi province

Rainfall in Vietnam: Up to 12 inches in some areas during storm

Storms to hit Vietnam this year: 15