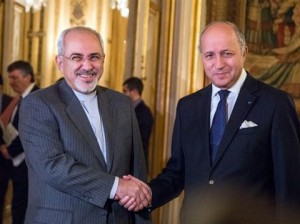 Iran’s foreign minister said on Sunday that the first deal in a decade over its nuclear programme could have been reached if one negotiating member – a clear reference to France – had not blocked it.

“There was a possibility to reach an agreement with the majority of 5+1 but there was a need to have the consent of all and as you have heard . . . one of the delegations had some problems,” Mohammad Javad Zarif said in a Facebook post referring to the six nations involved in the talks – the US, Russia, China, France, Britain and Iran.

France appeared to be concerned that the proposal, which involved Tehran halting key parts of its nuclear programme in return for modest relief from tough international sanctions, did not apply the brakes hard enough on the country’s agenda.

Despite the setback, William Hague, Britain’s foreign secretary, said on Sunday that he remained optimistic a deal could be struck in the next round of negotiations due to start on November 20. He said that disagreements were “narrow” and that the talks have been “very detailed”.

“There is a good chance of [a deal] but it is a formidably difficult negotiation,” Mr Hague told the BBC. “I can’t say exactly when it will conclude but . . . our negotiators will be trying again so we will keep an enormous amount of energy and persistence behind solving this.

“It is vital to keep the momentum. There is a deal there. A deal is on the table and it can be done,’’ he said.

Although Mr Zarif and John Kerry, US secretary of state, stressed that good progress was made, the failure to reach an agreement dashed the hopes of many Iranians who were expecting an easing of sanctions that have battered the country’s economy.

The change of government in Iran after the victory of Hassan Rouhani, centrist president, in June has raised hopes in Tehran and western capitals about the possibility of an agreement under which Iran’s nuclear ambitions are curbed and in return oil and banking sanctions are eased.

Mr Rouhani said in parliament on Sunday that Iran would not surrender to major powers because of sanctions – in a clear expression of anger at the failure of the talks.

We should boycott French fries and baguettes
– Mahdi, Iranian engineer

“We have told our negotiating partners in words and in practice that the language of threats, sanctions, humiliation and discrimination would not work under any condition. Iran has not and will not bow to any power in face of threats,” Iran’s president said.

He added that if there is no deal “at least . . . public opinion will be convinced that Iran is not stubborn and is not seeking weapons of mass destruction”.

Iran’s negotiating team was blessed last week with the strong support of Ayatollah Ali Khamenei, Iran’s supreme leader and ultimate decision maker, who urged hardliners not to weaken the diplomatic team during nuclear talks and said they were “children of the revolution”.

But the top leader’s official Twitter account on Sunday reposted his comments from a speech earlier this year in which he had condemned France’s alleged enmity toward Iran. “The officials of French government in recent years have shown explicit hostility toward the Iranian nation. This is a thoughtless and imprudent move,” the tweet said.

France has long been regarded as the most hawkish of the four western powers that negotiate with Iran over its nuclear programme and reflects the country’s deep-seated political commitment to the principle of non-proliferation of nuclear weapons.

One of the two main sticking points at the Geneva negotiations was the Arak heavy water reactor south east of Tehran and worries that it could produce enough plutonium to give Iran a nuclear bomb unless its operations are halted. A second sticking point is Iran’s stockpile of more highly enriched uranium, which is close to weapons grade.

Many ordinary Iranians, including the reform-minded public and those educated in the west, expressed outrage at France and accused it of trying to appease Israel and Saudi Arabia, which have been against any nuclear deal that would give Iran the right to enrich uranium.

“French cars occupy Tehran’s streets but instead France stabs Iran in the back,” said Mina, a 32-year-old businesswoman.

“France’s alliance with Saudi Arabia against Iran is nothing new and we had seen it during the Iran-Iraq war [1980-88] when the Saudis paid France to give fighter bombers and missiles to Saddam [Hussein] to kill us,” said Narges, a university student of politics.

“We should boycott French fries and baguettes in a symbolic move,” said Mahdi, an electric engineer.

Even Iran’s hardliners who are in principle against any deal attacked France. Fars news agency, close to the elite Revolutionary Guards, ran a headline: “Tough negotiations in Geneva and a French gun-wielding frog.”

Photo: French foreign minister Laurent Fabius, right, poses for photographers with his Iranian counterpart Jawad Zarif prior to their meeting at the Quai d’Orsay in Paris, France, Tuesday, Nov. 5, 2013. Zarif on Sunday blamed France for the failure of nuclear talks. (AP Photo/Benjamin Girette)