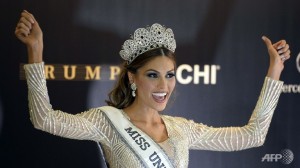 Squabbling bitterly every day over politics and economics, Venezuelans of all creeds could at least unite briefly on Saturday to hail their latest beauty queen.

Maria Gabriela Isler’s victory at the 2013 Miss Universe contest in Moscow won praise from heads of both political camps.

“Her triumph is Venezuela’s triumph. May God bless her always,” socialist President Nicolas Maduro tweeted in a respite from tirades against the right-wing “bourgeoisie.”

The South American nation has one of the world’s best records in international beauty pageants. While it is a source of pride to most Venezuelans, protests against exploitation of the female body were held at the last Miss Venezuela contest.