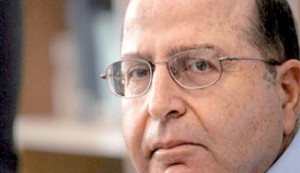 Israeli Defence Minister Moshe Yaalon said on Saturday that a landmark deal on Iran’s nuclear programme under discussion with world powers is a “historical mistake”.

“An agreement now, in the current conditions, is a historical mistake that will allow the bellicose regime in Tehran to pursue its dangerous nuclear programme and its ambition to spread terror and to undermine regimes in the Middle East and the entire world,” Yaalon said.

He urged world powers holding talks with Iran in Geneva on Saturday to be “intransigent” with the Islamic republic, in comments echoed by Justice Minister Tzipi Livni.

“There is no need to hurry to sign an agreement that will not reach its objectives, when a much more favourable agreement could be signed given the pressure Iran is under,” Livni said in a statement.

The proposed agreement — seen as a first step ahead of further talks on a final deal — would see Iran freeze parts of its nuclear programme for as long as six months in exchange for some relief from the sanctions battering its economy.

Diplomats from the P5+1 group, which is made up of Britain, China, France, Russia and the United States plus Germany, grappled to secure the deal at talks Saturday in Geneva.

After several meetings with fellow diplomats, Iranian Foreign Minister Mohammad Javad Zarif said there were still “disagreements” on some questions and pointed to divisions among world powers.

“There are differences of opinion within the P5+1 group,” he was quoted as saying by Iranian news agency ISNA, adding that negotiations would not continue into Sunday if a deal was not reached.

“If we do not reach an agreement tonight, the talks will be resumed in the next seven or 10 days,” he said.

Israel is furious at the possibility of Iran striking a deal with the world powers.

On Friday, Prime Minister Benjamin Netanyahu warned US Secretary of State John Kerry that he was offering Iran “the deal of the century”.

“This is a very bad deal. Israel utterly rejects it,” Netanyahu said, vowing that Israel would not be bound by any agreement.

Israel, the Middle East’s sole if undeclared nuclear power, views a nuclear-armed Iran as an existential threat and has not ruled out a pre-emptive military strike to defend itself.

Western governments — and Israel — suspect Iran of seeking to develop a nuclear weapons capability under cover of its civilian programme. Tehran denies any such ambition.

Iran has opened up to the West since the election in June of reputed moderate President Hassan Rouhani who replaced hardliner Mahmoud Ahmadinejad.