Palestinians lost out more than most in exodus from Syria 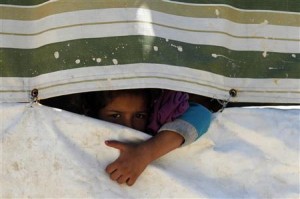 Palestinians Mahmoud and Ahmed fled Syria last month for Egypt, where they paid smugglers to bring them to Europe. Once at sea, they were robbed at knifepoint and herded onto an overloaded boat that sank, pitching over 100 into the sea.

The brothers made it back to shore while others drowned, then to be deported in days from a volatile Egypt where anti-Palestinian sentiment runs high. Now at the Lebanese camp of Ain al-Helweh, they face as Palestinians restrictions on their lives far more severe than any other refugees from Syria.

A people all too familiar with refugee life, Palestinians have lost out more than most in the exodus from Syria.

“They grabbed the women and children and tossed us onto the boats like they were tossing rocks or some other worthless thing,” said Mahmoud, 23, who asked that his family name not be used. “There was no way to turn back.”

“They pulled knives on us and took our money and mobile phones and stripped the gold off the women.”

The war has forced some 50,000 Palestinians to flee Syria, a country where they had enjoyed some of the most favorable treatment in all of the Arab world.

The number is a sliver of the 700,000 registered Syrian refugees in Lebanon, but enough to strain overcrowded and volatile camps and stir memories of Lebanon’s own civil war; a conflict some see rooted in the arrival of armed Palestinian factions in the decades after Israel’s foundation in 1948.

Noufa Sallem, a 55-year-old Palestinian from Syria, fled to Ain al-Helweh, Lebanon’s largest camp, about a year ago after shelling gutted her family’s four-storey home in Damascus.

She and two of her sons settled in a dirt lot in a tent of plastic sheeting and wooden planks, around the corner from a neighborhood run by a faction of radical Islamists.

Sallem’s husband, a teacher with the United Nations Relief and Works Agency, founded in 1949 to help Arabs fleeing Israel, died of a heart attack before they left Damascus.

Then in September she found out her third son, who stayed in Syria because he had not done his military service, had been killed. She had not spoken to him since fleeing and learned about his death through a news website.

Palestinians face a particularly hard time in Lebanon because they are barred from working in over 70 professions and are subject to major restrictions on property ownership and access to state services.

The coastal country of 4 million people also faces its own crippling political disputes and an economy hammered by the loss of tourism and business because of Syria’s civil war.

“Lebanon is a small country … and it’s already suffering from social, economic and security problems,” said Kamel Kozbar, a city councilman in the southern city of Sidon where Ain al-Helweh is located.

“Now this, as they say, is adding fuel to the fire.”

A sign inside Ain al-Helweh welcomes you to “the Capital of the Diaspora” as soldiers at the entrance check IDs and search cars. Jumbles of murals, images and slogans from some of the 16 or so political factions that run the camp cover the walls.

Poverty is rife and water-borne diseases are common because of shoddy infrastructure. Healthcare and education are provided largely by UNRWA.

Arrival can be especially hard for refugees from Syria, where they had had access to schools, healthcare and government jobs. The hopelessness occasionally inspires spectacular acts of desperation.

Kozbar, the Sidon city councilor, has an office decorated with brightly colored motivational posters, but his outlook is thoroughly bleak.

There is not enough food, shelter or clean water for the refugees pouring into the country, he said. Lebanon’s government, beset by chronic economic and political malaise, was doing little to help. The desperation was ripe for exploitation by drug dealers, pimps and religious radicals.

“If the situation remains like this, we will be on the verge of a population explosion, and maybe a security explosion, both inside and outside Ain al-Helweh,” said Kozbar, who is also a secondary school principal in Sidon.

That apocalyptic forecast is becoming common wisdom for many in Lebanon, only about a third as big as Belgium, its delicate social fabric especially vulnerable to the sectarian conflicts simmering across the Middle East.

Some fear the desperation could fire radicalization and violence – an especially potent concern since many link Lebanon’s 1975-1990 civil war to the arrival of Palestinian fighters after the foundation of Israel.

More recent memories include the battle of Nahr al-Bared, a Palestinian camp in the northern city of Tripoli where a radical Islamist group battled the army in 2007.

Lebanese are already divided over Syria’s civil war, and both Sunni and Shi’ite factions have sent fighters to join opposing sides in what has become a deeply sectarian conflict.

Still, there have been few recent examples of Palestinians getting involved in Lebanon’s political disputes. Camp leaders, sensitive to their precarious position, say they want nothing to do with Syria’s war or Lebanon’s factional quarrels.

In Lebanon, Palestinian refugees are essentially trapped between two countries bent on maintaining demographic equations that exclude them.

For many refugees who have had to flee two or three times, hope has already faded. Sallem, the woman in Ain al-Helweh, traced her family’s history of displacement back to their first expulsion from Safed – now in northern Israel – in 1948.

They resettled in Syria’s Golan Heights, but were uprooted again when Israel occupied the territory in 1967, she said. Now Syria’s war has forced them to start over again.

“There’s a lot of talk about Palestine on the satellite channels and in the newspapers. A lot of talk,” Sallem said, smoking cigarettes at a table strewn with jasmine flowers outside her tent.

“But unfortunately it seems we’re just theatre to keep officials entertained, a play for the world to watch and laugh at while we drown.”