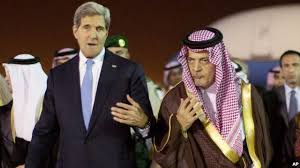 U.S. Secretary of State John Kerry on Monday played down any rift with Saudi Arabia, saying relations between the two countries were strategic and enduring and that both agreed negotiations were the only way to stop Syria’s civil war.

The Syrian crisis could only end with “a negotiated political solution. This crisis will not end through military force in our judgment,” Kerry said.

“A negotiated political settlement as layed out in the Geneva communique we believe is the best way to end the bloodshed, respond to the humanitarian crisis in Syria, to counter the violent extremist groups that we both agree are growing in their threat to all of us and must be stopped,” he added.

Saudi Arabia, Washington’s main Arab ally, is angry over what is sees as a weak foreign policy on the part of the Obama administration which has allowed Israel to continue building settlements in the Palestinian territories and conflict to persist in Syria.

Saudi concerns are also partly founded on a fear that President Barack Obama’s moves to reduce tensions with Iran will give Riyadh’s main regional adversary an opportunity to extend its influence in Arab countries.

Kerry reiterated that the United States was determined Iran would not get a nuclear weapon and promised to keep Saudi leaders abreast of any talks with Tehran, saying there would be “no surprises”. Iran says it is enriching uranium only for civilian energy purposes.

However, differences between the countries were also in evidence, as Kerry said there could be no military solution to Syria’s problems and that the U.S. had neither “the legal authority nor desire” to intervene in the war.

Kerry said violent extremists in Syria were growing in strength, a key area of U.S. concern stopping it from working more closely with the opposition as Saudi Arabia has asked.

However, he said Washington would continue to support moderate elements in the opposition.

Prince Saud said that while he understood the importance of talks, they could not go on indefinitely, and added that the “Geneva 2” Syria peace talks could not happen without the rebels being involved.

Kerry also spoke about the Israel-Palestine peace process and on Egypt, two other areas of dispute between Washington and Riyadh.

Saudi Arabia is angry that the United States has not pushed Israel hard enough to stop settlement construction and that it did not back Egypt’s military after it ousted a Muslim Brotherhood government in July.

He said the U.S. would continue to pursue the current track of negotiations on Middle East peace, and added that Washington would support economic transformation in Egypt.