Panetta: US may have to use military force against Iran 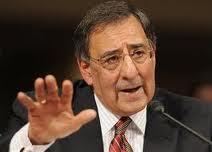 Addressing the Anti-Defamation League’s 100th annual meeting on Thursday night, former US secretary of defense and CIA director Leon Panetta told the ballroom of around 600 people that while the US has “implemented unprecedented sanctions and pressure on Iran, we may very well have to use military force to back up our policy, ” Israeli daily Jerusalem Post reported on Saturday.

US president Barack Obama has often said that “all options are on the table” when it comes to negotiating over Iran’s nuclear program. Panetta, who was receiving the ADL’s William and Naomi Gorowitz Institute Service Award, said the US needs to “maintain a healthy skepticism” when negotiating to suss out Iran’s true level of commitment to the process.