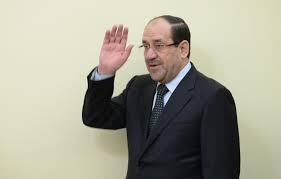 Iraq’s Prime Minister Nuri al-Maliki travelled to the United States on Tuesday to press for urgent help and arms to combat the worst upsurge of violence in years.

Nearly three years since the last U.S. troops withdrew, Sunni Islamist militants are waging a campaign to destabilize the Shi’ite-led government that came to power after former dictator Saddam Hussein was overthrown in 2003.

Trained and equipped by the United States at a cost of $25 billion, Iraq’s security forces are struggling against Sunni Islamist insurgents who have driven the civilian death toll so far this year above 7,000.

“The urgent thing is to supply Iraq as quickly as possible with weapons of an offensive nature to combat terrorism and chase the armed groups,” Maliki said at an airport news conference before his departure.

Iraq has in the past urged Washington to speed up delivery of an order of F-16 planes, but Maliki said those would not help Baghdad fight militants and the priority now was to get other kinds of equipment such as helicopters.

Officials in Baghdad blame deteriorating security on the civil war in neighboring Syria, which has drawn hardline Sunnis and Shi’ites from across the region.

Al Qaeda’s Syrian and Iraqi affiliates merged earlier this year to form the Islamic State in Iraq and the Levant, which has claimed responsibility for attacks on both sides of the border.

Iraq is struggling to control the long border without U.S. intelligence capabilities, and Maliki said he would seek more cooperation with Washington on that front.

Maliki’s critics say the increase in violence has as much to do with the marginalization of Iraq’s Sunni minority under his government than spillover from Syria.